If I had my way, I would encourage Verizon Wireless to invest in both hologram technology and more “Star Wars” film rights. That would allow the carrier to hire an Alec Guinness lookalike who could pop up in 3-D visions in Verizon stores across the country, wave his hand over racks full of Motorola’s new smartphone, and in full Obi-Wan Kenobi drag intone the words, “these are the Droids you’re looking for.” 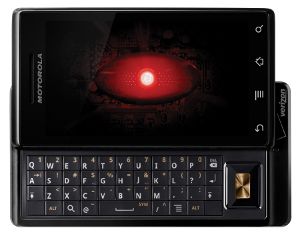 Ohhh-kayyyy, so maybe it’s a good thing I’m not in charge of Verizon marketing. (Besides, Verizon already paid Lucasfilm for the right to use the Droid name; they’ve probably written enough checks to George Lucas by now.) But as someone who has found the carrier lacking in matching up snazzy smartphones with what I have found to be very reliable network service, Motorola’s new Droid finally provides the coolness quotient I have been looking for in a Verizon handset. Dare I say, it might be enough to pull potential smartphone customers away from the effect of the Apple-AT&T iPhone tractor beam.

My friends who have iPhones all tout the App Store, the multimedia capabilities, the way they like to rub my face in their ability to acquire U2 tickets by posting pics and videos from the recent tour on their Facebook pages via their phones. Yes, they love their iPhones — as long as they don’t have to actually make a phone call on them. Complaints about AT&T service dropouts, along with delays in MMS, tethering and background processing, provide Verizon and other carriers with an opening to tout their handset offerings, yet no one has come close yet to providing the marriage of style, tech innovation and ease of use that has been the iPhone story so far.

The Droid, however, finally gets Verizon in the same area code as the iPhone.

The Droid with the Android 2.0 operating system goes on sale today for US$199 (with $100 rebate and two-year service plan). For that, you get a 3.7-inch touchscreen that’s slightly larger than the iPhone’s. The virtual keyboard is there, but the big draw for many may be the slide-out physical QWERTY keyboard that really doesn’t add that much more to the Droid’s thickness compared to Apple’s phone. Motorola apparently realized that many users, including business customers, have to have that keyboard for emails, which may have kept them away from the iPhone up to now. I found both keyboards, like all smartphones, require a bit of a learning curve and make for slow going at first, but at least the physical one was spread out well considering the phone’s size.

The Droid is also fast. Han Solo’s Kessel Run record may be in jeopardy. The Droid’s processing power and Verizon’s network strength (in my particular neck of the Pacific Northwest woods) combined for speedy bootup, Web surfing, Google searching and app launching. However, 16GB of storage may get pushed to the limit depending on how many apps you want to load up and how many videos and pictures you want to keep on the phone using its camcorder and five-megapixel camera.

There’s Exchange and Gmail integration and the ability to copy and paste. Verizon is also playing up Droid’s voice-activated search and dialing capabilities, as well as being able to download PC desktop-style widgets from the Android Marketplace — that means notifications get pushed to you on the bar at the top of the home screen that also shows signal strength and battery level. Pull that bar down curtain-like with your finger and you get your incoming emails and texts, along with sports scores, stock quotes and Facebook updates.

The inevitable iPhone comparisons bring up some features that weigh in Apple’s favor. You can’t pinch and squeeze the screen image on a Droid; you are stuck with punching plus and minus buttons to zoom in and out. The App Store just passed the 100,000 landmark, while the Marketplace boasts 12,000. That’s more than other rival OSes but not near enough in terms of variety and functionality to compete with the App Store. However, Android developers are no doubt working feverishly on apps for this and other Android 2.0 handsets yet to come.

Verizon is smart to play up its free Google Maps Navigator beta, which basically turns your Droid phone into a GPS navigation unit, including spoken turn-by-turn directions. An accessory lets you mount the phone in your car for hands-free navigation.

The Droid is the first phone I’ve had in my greedy little paws in a while that pulled me back for more exploration. That hasn’t happened since the first iPhone. I had fun playing with the Cardio Trainer, the Google Sky app for astronomy buffs, and Google Maps traffic alerts. I zoomed in on my house using Google’s satellite maps. I put the GPS unit inside it through its paces.

Therein lies the Droid’s real strength: its Googleness. (Googleosity?) It’s the first Android OS-based phone that had me considering all the ways I use Google in my daily life: work emails, calendars, contacts (maybe Google Wave soon?). I also use it to get directions to meetings via Maps and do basic searches for restaurants, movie listings, etc. To have all that in a semi-stylish, slim-enough smartphone is compelling. Sure, Google is available on other phones, and there are other apps that provide the same functions as Google’s suite of software. But to have a phone OS designed by the search giant, and coupled with a handset manufacturer that may be getting its second wind, could put Verizon and the Droid in a better position for a 2010 duel with the iPhone.

I’m sensing a possible disturbance in the iForce, and the spunky little Droid may be the cause.