An international group of scientists led by researchers from the University of California in Santa Barbara have taken the first steps toward creating a quantum computer — in a diamond. 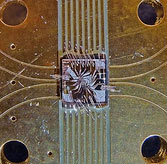 So far they’ve built a two-qubit unit for a quantum computer.

A qubit is the quantum computing equivalent of a bit, and it can be both on and off at the same time, unlike a regular bit which must be in one state or the other.

“We’re exploiting the hyper-fine interaction between the electron spin and the nuclear spin,” team member Zhihui Wang, a post-doctoral researcher at UC Santa Barbara, told TechNewsWorld. “Such interaction exists naturally in the system.”

The electron spin precesses “really fast” in a magnetic field, while the nuclear spin is about 1,000 times slower, Wang said. The fast spin can be used to process information and the slow spin for storage.

Precession is a change in the orientation of the rotation axis of a rotating body. It’s most clearly seen in a spinning top that’s slowing down and leaning first one way and then another.

The experiment was a proof of concept to show that it’s possible to protect a qubit against decoherence.

Decoherence can be considered as the loss of information from a system into the environment. It’s one of the obstacles to building a working quantum computer because such computers require that coherent states are preserved.

Some Information About the Experiment

Chemical vapor deposition is a process of building a solid material layer by layer, through exposing the substrate to volatile substances which either react with or decompose on the substrate to create a deposit. It’s often used in the semiconductor industry to produce thin films, and is also used to produce synthetic diamonds.

The team wanted a diamond with the nitrogen-vacancy (N-V) defect, which is one of various flaws in a diamond. Its most explored property is photoluminescence. “The nitrogen-vacancy center has some nice electrical and optical properties that facilitate it to be a candidate for quantum bits,” Wang said.

An “individual N-V center,” as these flaws are also called, can be considered a basic unit of a quantum computer.

In an NV-center, one carbon atom in the diamond is replaced by nitrogen, and a neighboring lattice point is empty. A diamond consists of carbon atoms arranged in a lattice formation.

Electron spins at N-V centers can be manipulated at room temperature by applying a magnetic field, an electric field, microwave radiation or light, or a combination of these. This results in sharp resonances in the intensity and wavelength of the photoluminescence that can be explained in terms of quantum entanglement and other phenomena related to electron spin.

Both qubits used in the experiment are associated with the N-V center, Wang said.

The team applied microwave pulses to the electron spin to protect the qubits against decoherence.

“This is just to demonstrate that the approach could be viable,” Rob Enderle, principal analyst at the Enderle Group, told TechNewsWorld. “We’re still a long way from something that will actually run in production.”

Physicists working on quantum computing have been using diamonds extensively in the past few years.

Last August, scientists at Vienna University of Technology coupled microwaves to the quantum states of a diamond. The results of this project were published in Physical Review Letters.

A team consisting of scientists at UC Santa Barbara and the University of Konstanz in Germany managed to move the quantum information contained within one electron in a diamond into an adjacent single nitrogen nucleus and back again, using on-chip wiring, as reported in the journal Nature Physics in June 2011.

In June of 2010 scientists from the Wuhan Institute of Physics and Mathematics; the Chinese Academy of Sciences; and the University of Science and Technology of China, began exploring the capability of N-V centers in diamonds.