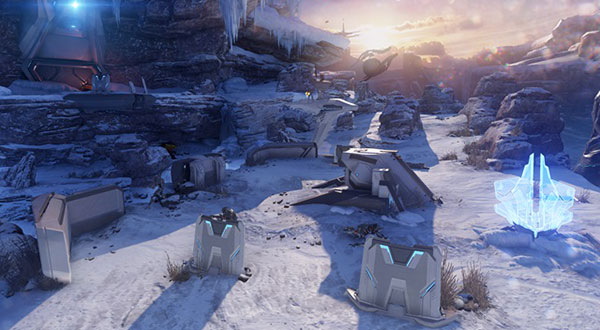 Weeks away from the launch of Halo 5: Guardians, 343 Industries and Microsoft on Tuesday revealed some of the technical ingenuity behind what’s expected to be the biggest Xbox One game of the 2015 holiday season.

The game’s developers have been raving about their playtime with the upcoming sci-fi shooter. For starters they’re promising first-class digital tourism in Halo 5: Guardians, with galactic locales ranging from life-filled jungles to snowcapped mountains. Also promised is a compelling narrative that will slow down the action and drive forward a story that presents players with several possible futures as they Hunt for the Truth.

Between the campaign’s battles, players can explore levels that range from relatively quiet quests to huge maps rendered by Xbox Live cloud compute and rigged for destruction.

The game’s levels, built on top of the game’s new engine, have been painted with colors from “seven distinct art palettes.”

That overhauled engine includes light-rendering technology that’s based on the physical makeup of meshes and models in Halo 5.

Possibly the biggest news for pro gamers was confirmation of a stable 60 frames per second, rendered via variable resolution.

For scenes with a high density of object, all of which request power to render, the game engine will scale the graphics back from its 1080p base resolution to keep the workload down and the frame rate stable at 60 fps. 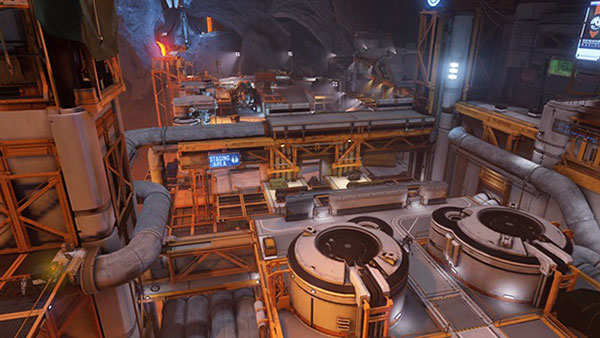 That has significant implications in the world of e-sport, according to Jon Peddie Research’s Ted Pollak, senior analyst for the games industry.

“Using dynamic resolution adjustment is an interesting strategy to maximize the game’s performance on the Xbox One’s hardware,” he told TechNewsWorld, “and it will give competitive players a better experience.”

Along with high-fidelity cosmetics and what’s promoted as an engrossing campaign, there’s another thing Halo 5: Guardians has going for it, according to Mario R. Kroll, principal at berStrategist.

Halo 5: Guardians will beat several big titles to the punch by weeks, he said.

Launching early and tactfully doesn’t always ensure success, but historically it has helped, and Halo held its own in the past.

“Rather than waiting for November, when there is huge competition from the latest Call of Duty (Black Ops III), the expertly hyped fan favorite Fallout 4 — and finally, the force-driven Star Wars: Battlefront, which has everyone [but single-player campaign fans] drooling, Microsoft decided to launch its latest Halo installment this October,” Kroll told TechNewsWorld.

Halo for the Holidays

Halo’s early start on the holiday rush will benefit from several supporting moves Microsoft has planned: the special edition Xbox One, which has a fattened 1-TB fusion drive; the recently launched Halo Wars 2; and a Windows 10 experience that’s due to deliver in November.

“I believe that between superior pricing over the PS4 and Halo 5 as platform exclusive, it will certainly help Microsoft gain some ground with the Xbox One,” Kroll said.

The list of reasons for holding out on moving from Xbox 360 to Xbox One continues to shrink, Kroll noted. Halo 5: Guardians, possibility Microsoft’s biggest game for a while, is poised to drive Xbox Ones out of the storerooms and into the living rooms.

“There are a number of impressive multiplatform titles coming out that will benefit both XBox One and PlayStation 4,” Kroll said, “but arguably, Halo 5 should have the biggest impact as a new release console exclusive game on the XBox One platform, in terms of encouraging sales of that hardware this fall/holiday season.”

With Sony shipping PlayStation 4s at roughly twice the volume of Xbox Ones, Microsoft needs more “arrows in its quiver,” said Kroll. With Halo, at least, Microsoft has proven time and time again it can generate impressive sales figures.

“There’s no question that the Halo franchise is highly successful and very important to Microsoft’s Xbox strategy,” Pollak said. “It behooves them to remind fans of any significant developments to keep the buzz going ahead of the upcoming holiday shopping season.”