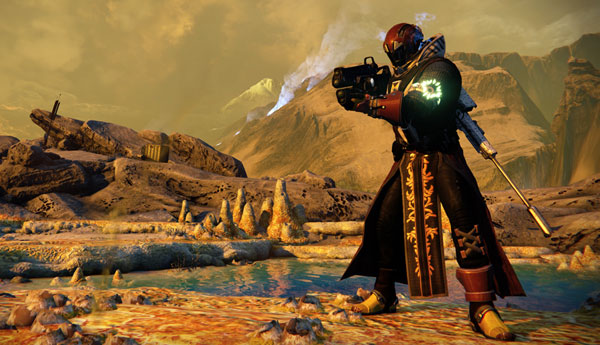 Bungie’s second special Destiny event — dubbed “Vault of Glass” — went live early Tuesday. Bungie calls it “the most elaborate mission” it has ever created. Only gamers who have reached Level 26 will qualify. Attempts to complete the Raid are being streamed live on Twitch.

After months of hype and anticipation, Destiny, the latest video game from Halo developer Bungie, finally arrived last week. Although sales have been extremely strong — it’s expected to be the biggest title of the year, in fact — Bungie announced a series of in-game events hot on the heels of the launch, in an effort to spur even more interest in the groundbreaking sci-fi game.

Bungie has promised that Destiny will be a game that will unfold over time and offer fresh surprises for gamers.

The first event, “Salvage,” began running on Friday and continued through the weekend. It featured small-to-medium-sized maps with a focus on multiplayer gameplay.

“Multiplayer is a big part of this game,” Paul Semel, editor at Electronic Gaming Monthly, told TechNewsWorld. “Destiny is not a one-trick pony. It certainly is not a game you can play in a single session. There is a lot more to this game than just the single player.”

With its space opera setting, which features a grand adventure in the distant future, when humans in special combat armor battle aliens bent on destroying mankind, the story line for Destiny might not seem all that different from Halo, yet the game’s developers actually crossed genres and created something that was more than just another sci-fi shooter. Destiny includes role-playing elements and offers players the ability to explore vast open worlds.

A character can level up and be upgraded as the game progresses and get much more than just a new fancy weapon. Adding these elements came with some risks but apparently has paid off.

“The fact that it is coming from Bungie is a big factor,” Wanda Meloni, senior analyst at M2 Research, told TechNewsWorld. “Consumers are very familiar with the level of work they can expect from Bungie and that has certainly helped.”

The game could be the first true killer app for Sony’s PlayStation 4, as well as for Microsoft’s Xbox One. It offers high definition graphics, real-time dynamic lighting and a “matching” feature for multiplayer adventures.

“It is a beautiful game and a true next-generation game,” independent video game analyst Billy Pidgeon told TechNewsWorld. “This couldn’t have been produced for the last-generation systems. It takes some chances, and it has paid off.”

Destiny was a costly gamble for both Bungie and Activision. Activision spent nearly US$500 million in its development and marketing, according to media reports. That would make it the most expensive game ever created — and even more expensive than the film Pirates of the Caribbean: At World’s End, which had a reported $341.8 million budget.

Activision has said the game didn’t cost anywhere near that much money — but even if it did, it could turn out to be worth every penny. The game already has surpassed $500 million in sales to claim the title of biggest new franchise launch in video game history.

“It was one of the most effective prerelease promotional campaigns that the video game industry has seen,” noted Pidgeon. “They’ve been selling the game for months, and Bungie has had a lot of goodwill from what it did with Halo. Gamers were prepared to like it before they ever picked up the controller.”

Since the sci-fi epic sets up quite well for numerous sequels, Destiny could become another billion-dollar franchise for Activision.

“Destiny is a fantastic success for this next gen, and with Activision having already recouped their $500 million investment,” said Meloni. “It shows promise there is still life in the consoles.”

While sales have been strong, one thing that Destiny didn’t earn was an endless stream of early reviews praising the game play. In fact, Bungie did not allow prerelease reviews, explaining that the game should be reviewed when it was populated with thousands of players. That move certainly didn’t hurt the early sales.

“Bungie didn’t get the servers up until just before the release, and those were required to play the game,” explained Semel. “Bungie also issued a statement to reviewers that it takes time to get a handle on this game, and it also takes so long to play it. Bungie clearly didn’t want to see reviews go up where people only played for a few minutes and based the reviews on those limited experiences. There is so much more to this game.”

The decision to hold off the reviews, especially for a genre-defying game, could pay off for the developer and publisher. This raises the question of how relevant actual “game reviewers” even are today.

“There has been a lot of discussion this week about the ongoing relevance of the meta critic,” observed Meloni. “In this age of social media, [reviews] become much less relevant as consumers are making their own decisions and sharing with their networks. [Social networking] is a very powerful driver.”