Dell Zeros In on the Corner Office With High-Style, $2K Laptop

This is way out of the Dell dude’s league.

Dell’s newest addition to the Latitude line, the Z600, is designed as a sleek envy item for high-ranking corporate executives, entrepreneurs and other style leaders, and bears the stats to prove it, beginning with its US$1,999 starting price tag. 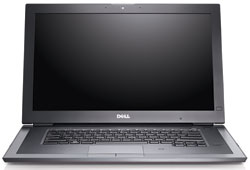 Dell bills the 4.5-pound , 0.57-inch thick unit with a “black cherry” finish as the lightest, thinnest 16-inch unit on the market, as well as the world’s first laptop with wireless docking as an optional accessory. It also features inductive charging, eliminating the need for power cords with use of a charging stand.

It’s also the first Dell to fully implement Latitude ON, a hardware-based instant-on technology that can access Microsoft Exchange servers to deliver a constant stream of emails, calendar items and other basic information services without waiting for the laptop to boot up. The company is comparing the feature to having a built-in smartphone inside the laptop.

The technology includes a second motherboard with its own processor and operating system to run the instant-on service. Run times for the feature can stretch as long as two days, according to Dell.

It also features an integrated 2 megapixel camera with software that allows users to use the camera to scan and save business cards to Microsoft Outlook contacts, as well as to “scan” and copy documents.

On sale as of Monday in select countries in Europe, as well as the U.S. and Canada, it also comes with custom-designed bags by Cole Haan and Timbuk2.

But Will It Sell?

It might seem counterintuitive to come out with a pricey full-sized laptop in the apparent era of the cheap netbook, especially in the middle of a recession when IT budgets are at their leanest.

However, this move is about Dell reasserting its ability to create sophisticated design as well as value computing, and giving executives who want a sleek, impressive computer an option beyond the Sonys and Apples that have dominated that market, said Michael Gartenberg, vice president of strategy and analysis with Interpret.

“That executive walks into a meeting and takes out his Dell instead of a Sony or an Apple — that makes a difference,” he told TechNewsWorld. “They’re not going to sell a lot of these, but the ones they do sell will matter.”

Designed for the IT Team, Too?

The move is a clever way for Dell to help IT departments meet the needs and wants of C-level executives who demand fancy computers, Gartenberg said. They can satisfy them without having to tear up existing vendor relationships or re-engineer their networks to make a Mac work with corporate IT assets.

“If you’re looking for a cool, high-tech product like this from a business standpoint, Apple doesn’t have nearly the cachet it does among consumer power users,” he told TechNewsWorld.

Dell did not respond to questions about its marketing strategy by deadline for this publication, but in a blog posting, the company noted the product is part of a line dedicated to “purpose-engineered” products, which include ruggedized laptops and machines designed for educational use.

In the end, what Dell appears to be offering is less about substance and more about style, said Baker.

“Dell has been pretty aggressive over the last few years about upping their design DNA,” he said. “This is just part of that.”