Dell’s new education-themed netbook may look like it’s aimed at kids, but it’s really educators the Texas-based computer manufacturer is hoping to lure with the Latitude 2100. 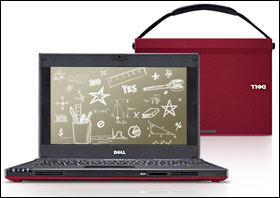 The 10.1-inch netbook is designed specifically for school environments, with rubbery non-slip surfaces, an optional antimicrobial keyboard and a telltale network activity light along the top edge of the clamshell to alert teachers when little minds might be straying from their studies. It also lacks vents on the computer’s bottom, a design feature meant to keep spilled liquids out of the case.

The computer can come with a touchscreen, which the company said is a first for an education netbook.

Most schools Atlanta-based Weston visited still have just a handful of computers in the back of the classroom, he said.

“We have a connected generation that has to disconnect when they come to the classroom,” he remarked.

Weston and other Dell researchers asked why and found that concerns over cost, complexity and the ability of students to successfully use computers in the classroom slowed adoption.

“So, we went to the drawing board, and the product we released today is a direct response to what we heard from our customers,” Weston said.

The netbook is powered by an Intel Atom processor; it comes either with a solid state drive or a traditional hard drive, and a card reader. An optional webcam is available. It ships with Windows XP Home, Vista Home Basic or Ubuntu Linux.

Dell also plans to sell a “mobile computing station,” essentially a rolling storage and charging cart that can hold up to 24 laptops. IT administrators can manage stored netbooks by connecting them through the cart’s Ethernet cable, according to Dell.

Colorful for a Reason

One of the most obvious school-themed features of the netbook is color. It comes in Chalkboard Black, School Bus Gold, Schoolhouse Red, Blue Ribbon and Ballfield Green.

Teachers specifically asked for colorful options to help distinguish their classes’ netbooks from those in other classrooms, Weston said.

Interestingly, Lenovo’s education netbook comes in just one color — neutral gray — because teachers didn’t want kids to tussle over favored colors, according to Maria Katime, a spokesperson for Lenovo.

Schools can equip the computers with quick-connect handles and shoulder straps.

The desktop experience on the computers is fairly standard, Weston said, adding that he’s not sure which OS schools would prefer.

However, it is clear that netbook purchasers view price more consciously than other computer users, he noted.

Some school districts may choose to mesh the netbooks with a local cloud-computing service, storing apps on the network to keep hardware problems to a minimum, Weston suggested.

Dell has a partnership with Stoneware, a cloud-computing service provider.