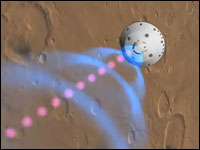 Nasa’s Curiosity rover has begun satisfying the curiosity of mission scientists by sending high-quality images of Mars’ surface back to Earth. Although it’s only had since Sunday night to collect data, following its touchdown in the Gale Crater, Curiosity has sent a batch of snapshots that are already allowing the NASA team to garner a good deal of information.

The rover’s first pictures show where its hardware — including the sky crane, a parachute, a heat shield and a back shell — landed, giving scientists new insights about the Martian surface.

“Next to the rover, you can see where the rocket thrust blew away some of the soil and revealed a harder material underneath,” said Mike Malaska, a NASA Jet Propulsion Laboratory solar system ambassador. “That tells us that the firm material layer might not be very thick.”

“The wheel is resting on the surface — it hasn’t sunk in at all — so the surface must be pretty firm,” Malaska explained. “It looks like the materials are a pretty uniform size. That’s also a clue that it has been geologically sorted — maybe either by wind or water in the past.”

Images from Curiosity show a massive mound in the distance, dubbed “Mount Sharp,” as well as dark dunes that scientists guess are made of volcanic sands. The plan is for Curiosity to explore the dramatic scenery as its mission progresses. 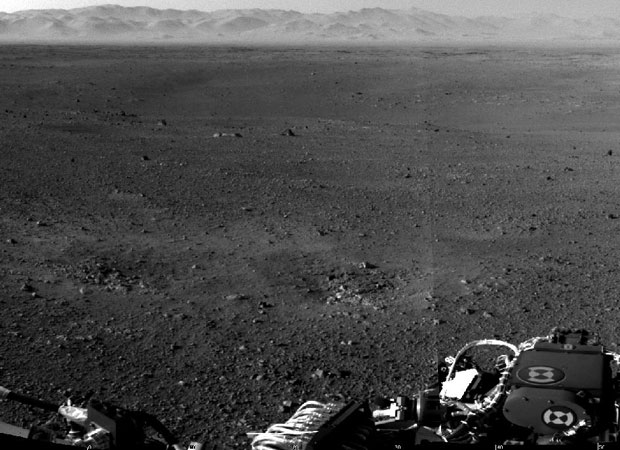 These are the first two full-resolution images of the Martian surface from the Navigation cameras on NASA’s Curiosity rover, which are located on the rover’s “head” or mast. The rim of Gale Crater can be seen in the distance beyond the pebbly ground. The topography of the rim is very mountainous due to erosion. The ground seen in the middle shows low-relief scarps and plains. The foreground shows two distinct zones of excavation likely carved out by blasts from the rover’s descent stage thrusters. These are full-resolution images, 1024 by 1024 pixels in size. (Image credit: NASA/JPL-Caltech)

Towering higher than Mount Ranier, Mount Sharp stores layers of rock and minerals that have accumulated over more than 2 billion years. Scientists handpicked the Gale Crater for Curiosity’s mission because the massive rock layers at Mount Sharp can give the best clues about the water — and possibly life — that may have existed in Martian history.

“Curiosity’s mission is to look for signs of one of the most significant things imaginable — signs that life exists or has existed somewhere other than Earth,” said James R. Webb, professor of physics and director of the SARA Observatory at Florida International University.

“Astronomers have known for many years that Mars used to have a much thicker atmosphere and that it undoubtedly had surface water, lakes and rivers,” Webb told TechNewsWorld.

Now, liquid water would evaporate immediately on the surface of Mars, he said, but beneath its permafrost and polar ice caps, water still exists. Scientists knew that much about Mars before Curiosity’s mission, from previous images gathered by orbiting crafts.

Curiosity will sniff around the planet for more clues about past Martian life — although that life probably won’t look like anything out of a sci-fi film, according to Webb.

“Curiosity is a large, car-sized rover which is fine-tuned to search for signs that Mars once, or perhaps still, supported some form of life,” he noted. “If life did arise on Mars, and if evolution had the same pace on Mars as it did here on Earth, only single-celled creatures would have had time to evolve before Mars lost its atmosphere.”

Curiosity is geared to explore that possibility of life over the course of its mission, transmitting clues about the planet’s past back to Earth, little by little.

“As the mission progresses, we’ll climb up that layer stack and read the stories in the rock like chapters in a book, one after another,” said Malaska. “Each rock layer will give us clues how Mars developed. We’ll start at the bottom, which are the oldest layers, and work our way upwards towards younger deposits.”

The relatively relaxed photo-snapping follows what was perhaps the most grueling episode in Curiosity’s adventure so far.

After traveling for eight months through space, the craft had just seven minutes — dubbed the “seven minutes of terror” — to touch down in a never-before-tried landing strategy called the “Skycrane maneuver.”

Many of the landing’s technical challenges hadn’t been used before, but everything worked smoothly.

“This engineering success paves the way for the next and future missions,” said Malaska.

Living Up to the Hype?

Curiosity’s landing was unique in that it generated buzz even outside the world of science and exploration. It was broadcast through a live online stream, and also for the general public on large screens across the country, including at Times Square for a crowd that didn’t seem to mind the middle-of-the-night timing.

Simply launching Curiosity and mastering the landing at a time when initiatives from NASA are some of the first to get slashed due to budget cuts is a major achievement, said Webb.

“This mission is already a success on so many levels, some that have nothing to do with the actual science it will perform. It represents a success for NASA, an agency that is being starved for funds,” he said.

The collective spirit surrounding Curiosity’s mission is a triumph on another level, said Malaksa.

“From a human perspective, this is a wonderful accomplishment,” he remarked. “It is really neat to turn on the news and see a bunch of people excited because we’ve done something magnificent that moves human progress and exploration forward. And it is a true ‘we.’ MSL Curiosity contains instruments from several nations, and the images are available to everyone through the Internet. We are watching exploration history.”