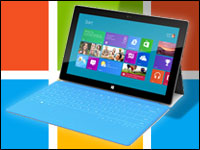 In the beginning, there was Apple’s iPad. For a long time, “tablet” meant the iPad and nothing but the iPad. Then competitors began to make an appearance in the tablet market. For CRM vendors, that state of affairs made developing mobile products and strategies much easier.

Now, there are several tablets of varying sizes competing in the market — new iterations that CRM vendors will have to take into account as they plan for future mobile projects.

Granted, some of the tablets, such as the new Amazon Kindle Fire HD 8.9, do not exactly target businesses. Others, such as Microsoft’s Surface tablet, do.

The Surface is likely to make a splash in the mobile CRM space, especially in B2B applications, predicted Dan Roche, VP of marketing at TalkPoint.

“I think Samsung laid the ground work for iPad competition, but the Surface will be the biggest landscape changer in mobile CRM,” he told CRM Buyer. “With the keyboard capabilities and other features, it becomes a much more functional work tool.”

This new array of tablets would not be problematic for vendors if they could be assured that this were it — that is, that no new form factors would be introduced and adopted by consumers. That assurance is not going to forthcoming, which means mobile developers have to accommodate a certain degree of hardware uncertainty in their design process.

This is especially true as BYOD, or Bring Your Own Device, gains more momentum in the workforce.

“Most mobile developers are being forced to think in terms of what new devices will be on the market and how their applications will work on these devices,” Joseph Burger, founder and CTO of Labor Sync, told CRM Buyer. “At the most basic, they are building elastic, flexible UIs because of the range of devices available today.”

Mobile Web developers and vendors are taking a few different approaches to this environment. Many tend to build a mobile Web app first, then a native app second, Alex Avendano, director of Arke Labs, a division of Arke Systems, told CRM Buyer.

“If you don’t need to access native device features, specifically device APIs like the camera or the local file system, it is more cost efficient to build a sophisticated mobile Web app that can run on any device and in most browsers on a desktop,” he said.

This approach provides the most bang for the buck and allows companies the option of BYOD, Avendano added.

“Alternatively, larger organizations that have extreme volume demands on the application — or that have significant security concerns — will want to control their device distribution, meaning they will own and distribute a specific iPad or Android tablet for all their users,” he continued. “In these cases, native apps are easier to develop, because you don’t have to worry about multi-platform versions of the app.”

Some vendors — most notably, Salesforce.com — are providing the necessary tools for users to tweak the application to the device their staff is most likely to use.

Such companies will provide a single code base that is able to run on a variety of devices, said Mike Niebling, a UX architect with Sonoma Partners.

“Salesforce.com’s Touch platform is an excellent example of this,” he told CRM Buyer. “Developers can write in HTML 5 and Touch allows the site to reconfigure and deploy the data in the ideal presentation.”

For example, if the device in question were a phone, the data would display in one long column. For a tablet, it would be two-columns.

In short, Arke’s Avendano said, mobile CRM providers are gearing up to handle the variety of devices, operating systems, and display resolutions that will inevitably come to market.

No One’s Better at Wrecking CRM Than the CEO

What the Election Says About Social CRM