Could Nvidia’s CEO Be the Next Steve Jobs?

I’m writing this before the iPad release last week, so you now know what I don’t — whether it met expectations. I imagine Apple sold out, but things aren’t looking so rosy at the moment, and I wonder if it will sustain the kind of growth the iPad 1 did.

I remain concerned that no other Tablet has shown anywhere near the success of the iPad and that the concept of “magical” that drove the iPad 1 has given way to “incremental” for the iPad 2. In a market with rapidly rising gas prices, folks may not buy an “incremental” product.

I’ll explore that this week, and I’ll close with my product of the week, what is likely the best iPad accessory on the market: the Pioneer VSX-1021-K receiver.

Apple: In Search of a CEO

The fact that Apple has supposedly found a replacement for Steve Jobs isn’t news; the Apple board claims to have one but doesn’t want to tell anyone because that would jeopardize the candidate.

To me, that means it is likely the candidate is external and not Tim Cook, because Tim Cook would be kind of obvious, and any company as well-funded as Apple can find the money to retain top talent. The person could be a subordinate of Tim’s, which would certainly be uncomfortable if announced, but that is a different problem that could be solved by having the two share responsibilities prior to Steve Jobs’ departure.

So it feels like the board’s eyes are trained on someone outside of Apple — someone whom they can’t protect.

In addition, Apple is hoarding tons of cash in what looks like a preparation to make a big purchase. Much of the speculation has historically surrounded Adobe, but Adobe’s CEO is a software guy, and software guys typically don’t do well running hardware companies. Can you, for instance, imagine Bill Gates running Apple? I don’t think so — even if he wanted to, which he doesn’t. It just wouldn’t work.

One name that seems to come up over and over again in discussions of who, among outside candidates, would be best is Jensen Huang, CEO of Nvidia, but he would never leave the company he created. So, could Apple buy Nvidia to get him?

Not Perfect but Closer Than Most

Huang isn’t a perfect match for Jobs, but then no one could be. He just seems closer in terms of natural skills than anyone else we cover in tech. Let me explain.

There are a number of people who run successful tech companies — but outside of Jobs, none does a particularly good job of announcing products. In fact, even at Apple, non-Jobs product announcements range from moderately interesting to gnaw-your-arm-off terminally boring. And most of Apple’s competitors tend to live on the lower end of that scale.

Finding a CEO who has passion for a company’s products — who isn’t a founder — has always been a bit daunting, because hired guns tend to focus on financials and delegate product responsibilities to the point where they know little more than the audience does about some new offering.

It is the passion that makes a difference, and that passion tends to be tied to founders, and Apple is out of founders to use as CEOS.

If you’ve ever seen Huang present, he stands up there with Intel’s Mooly Eden as having massive amounts of stage passion — and, unlike Mooly, he is a CEO. Granted, he’d need to be trained into Steve Jobs’ on-stage method, but he could step up to this task, because I’ve seen him to it for fans of Nvidia’s offerings over the years. Granted, Nvidia doesn’t have the level of loyalty in its fan base that Apple does, but then Nvidia builds parts, not systems.

Another trait that Steve Jobs has is the ability to drive the company to do the impossible. In the graphics industry, running against ATI then AMD — and always Intel — Nvidia has had to step up a number of times to do what folks thought couldn’t be done. And recognize that this industry has been in a decades-long sprint and is highly competitive.

Nvidia recently entered the smartphone race and, like Apple, went from a standing start to having more of the hot products that competed with Apple’s at CES than any other vendor. Makes you wonder what Huang could do if he had an entire product rather than just the components.

Nvidia: A Secret Weapon for Apple?

I’m of the belief that Apple is planning an eventual move to ARM for all of its products. This is because, at least under Jobs, it doesn’t like complexity. With Microsoft looking at the platform for Windows, you have to believe Apple is doing the same.

However, that migration would be ugly unless you had someone who was much deeper into the core technologies of x86 and ARM, particularly on the graphics side, than Apple currently is. In addition, one of the big differentiators for smartphones and tablets is graphics capability, which is why Qualcomm bought the mobile graphics business from AMD.

Nvidia’s patent portfolio would be daunting, particularly if used as a deny strategy against Apple competitors; it would catch most of the PC companies napping. Microsoft is so focused on Google, it likely wouldn’t see the risk until too late, and none of the other PC companies is positioned to buy control of a critical component.

Apple has saved up a lot of cash to apparently buy something, and the company’s directors apparently know who they want as their next CEO.

Could the solution to both puzzlers be Nvidia? It’s something to ponder, as those of us who bought the new iPad last week wait for them to arrive.

When I saw the Pioneer VSX-1021-K, I really felt like I was seeing the future. That’s not because this receiver is special in terms of power or capability — it is cutting-edge there — but because of the way it’s integrated with the iPad/iPhone/iPod touch platform.

My best experience was with the big-screen iPad, which was turned into a very powerful RF wireless learning remote. I don’t mean learning in that it learns other remotes; I mean learning because it learns how you want it to be and alters itself to do that. 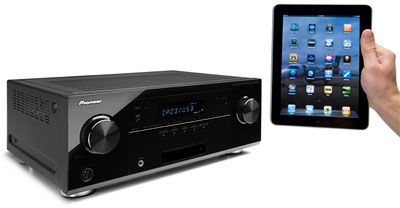 It has all of the advantages of a very high-end touchscreen remote control, and the iPad remains an iPad, so it has other uses. One of the cool things is that you can place yourself in the room and, using the iPad, have the receiver auto-tune the speakers for your specific location.

Another is Airplay integration — so if you have multiple receivers, they can all play the same Internet radio source at the exact same time (something only Sonos did well before).

I didn’t really get the power of Airplay until I saw this thing work. This is the first home entertainment product designed to work with the iPad, and it showcases a focus on detail that most companies, outside of Apple, just don’t get. That makes the Pioneer VSX-1021-K a natural for my product of the week.