A mysterious cosmic blast in the constellation Draco has astronomers scrambling to try to understand its cause, so unlike is it to anything ever observed before.

Rather than the short-lived gamma-ray bursts typically associated with the death of a massive star — most last no more than a few hours — this explosion continues more than a week later to emanate pulses of high-energy cosmic radiation for an effect that’s brighter, longer lasting, and more variable than scientists have ever seen. 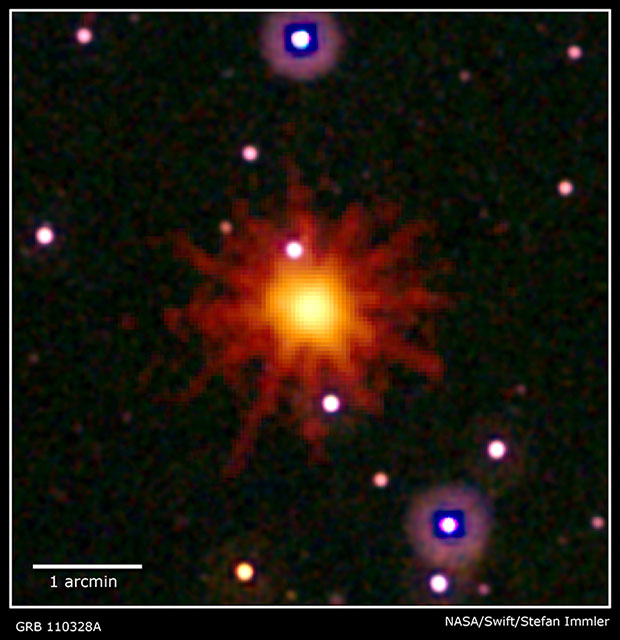 Images from Swift’s Ultraviolet/Optical (white, purple) and X-ray telescopes (yellow and red) were combined in this view of GRB 110328A. The blast was detected only in X-rays, which were collected over a 3.4-hour period on March 28. (Credit: NASA/Swift/Stefan Immler)

“We know of objects in our own galaxy that can produce repeated bursts, but they are thousands to millions of times less powerful than the bursts we are seeing now,” said Andrew Fruchter, an astronomer at the Space Telescope Science Institute in Baltimore. “This is truly extraordinary.”

NASA’s Swift, the Hubble Space Telescope and Chandra X-ray Observatory have teamed up to study the phenomenon. Currently, they believe that the unusual blast was most likely created when a star wandered too close to its galaxy’s central black hole.

Swift’s Burst Alert Telescope discovered the phenomenon in the constellation Draco on March 28 when it erupted with the first in a series of powerful X-ray blasts. The satellite determined a position for the explosion, now known as “gamma-ray burst (GRB) 110328A,” and informed astronomers worldwide.

It wasn’t long before dozens of telescopes focused on the spot and observed that a small, distant galaxy appeared very nearby. A deep image taken by Hubble on Monday pinpoints the source of the explosion at the center of this galaxy, which lies 3.8 billion light-years away. 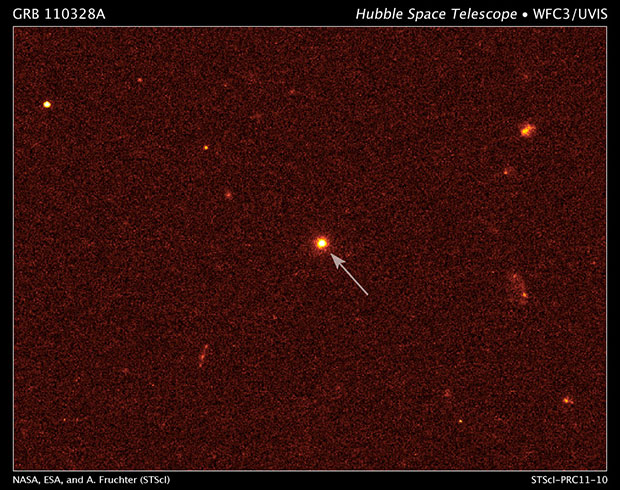 This is a visible-light image of GRB 110328A’s host galaxy (arrow) taken on April 4 by the Hubble Space Telescope’s Wide Field Camera 3. The galaxy is 3.8 billion light-years away. (Credit: NASA/ESA/A. Fruchter – STScI)

Also on Monday, astronomers used NASA’s Chandra X-ray Observatory to make a four-hour-long study of the phenomenon. The resulting image — which locates the object 10 times more precisely than Swift can — shows that it lies at the center of the galaxy Hubble captured.

‘Every Spiral Galaxy Has a Black Hole’

Most galaxies, including our own, contain central black holes with masses millions of times that of the sun; those in the largest galaxies can be a thousand times larger.

Just as the sun keeps the planets traveling around it in a stable position, so these black holes hold together their spiral galaxies and prevent them from falling apart, Czysz explained.

The star at the heart of this particular explosion was probably destroyed by a black hole less massive than that of our Milky Way, which has a mass four million times that of our sun, NASA notes.

Assuming that’s what happened, intense tidal forces would have torn it apart, producing powerful blasts of gamma rays and X-rays produced by matter moving near the speed of light in a particle jet that forms as the star’s gas falls toward the black hole.

Astronomers have detected stars destroyed by supermassive black holes before, but none have shown the X-ray brightness and variability seen in GRB 110328A, according to NASA.

In fact, the source has repeatedly flared, and has brightened by more than five times since April 3.

“Normally, when you get a neutron star exploding, it’s like a flash,” Czysz explained.

In this case, however, it’s not so much like a flash but an ongoing destruction process whereby it goes through a series of events but then eventually stops, he said. 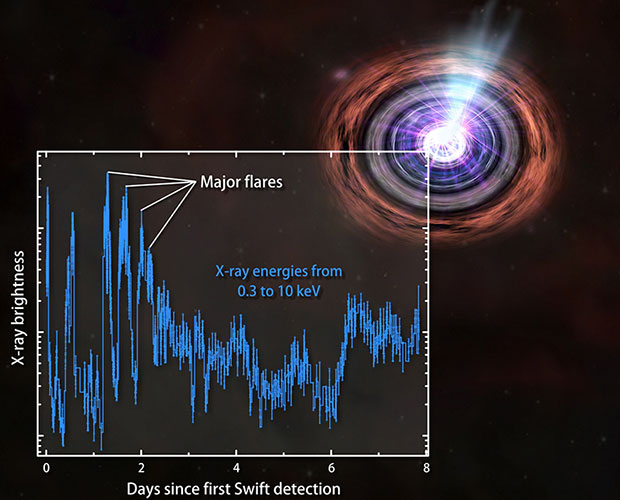 GRB 110328A has repeatedly flared in the days following its discovery by Swift. This plot shows the brightness changes recorded by Swift’s X-ray Telescope. (Credit: NASA/Swift/Penn State/J. Kennea)

The constellation Draco sits between the Little Dipper and the Big Dipper, Czysz pointed out.

Its name is the Latin word for “dragon,” but to see the shape of that mythical animal in its S-shaped pattern of stars, he added, “you have to have the imagination of the ancients.”