Neuroscientists at MIT have figured out how to use colored lights to temporarily quiet activity in the brain. By shining a light on a set of neurons affected by a gene-enhanced virus tool, they were able to shut those neurons down. When they turned off the lights, the neurons started right back up again. No harm, no foul. 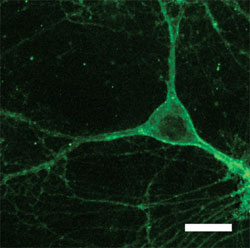 This is really good news for sufferers of chronic pain, epilepsy, brain injury, Parkinson’s disease or other ailments that involve abnormal brain activity, as the highly selective “silencing” might bring profound relief unobtainable through current drug regimens and conventional therapies.

It’s also a nifty way to study the mechanics of the brain “to understand how neural circuits work together,” said the study’s senior author, Ed Boyden, PhD, the Benesse Career Development Professor in the MIT Media Lab and an associate member of the McGovern Institute for Brain Research at MIT.

“However, it’s important to point out that these molecules can be expressed in heart, immune cells — any cells that use electricity as a signal, which is many of those in the body,” he told TechNewsWorld. Widespread application could bring about several major medical breakthroughs. 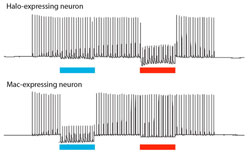 Halorhodopsin-expressing neurons are selectively silenced by red light, but not by blue light. The opposite is true for neurons expressing the gene Mac. (Courtesy of Brian Chow, Xue Han, and Ed Boyden / MIT)
(click image to enlarge)

The MIT scientists loaded Arch and Mac genes into viruses that can insert theses genes into mouse neurons. The two genes naturally occur in organisms ranging from bacteria to fungi. Essentially, they encode for light-activated proteins that help organisms make energy.

“Light activates the proteins, which lowers the voltage in the neurons and safely and effectively prevents them from firing,” Boyden explained. “In this way, light can bathe the entire brain and selectively affect only those neurons sensitized to specific colors of light.”

Neurons engineered to express Arch are specifically silenced by yellow light, while those expressing Mac are silenced by blue light.

“Multicolor silencing dramatically increases the complexity with which you can study neural circuits,” noted co-author Xue Han, a postdoctoral researcher in Boyden’s lab. “We will use these tools to parse out the neural mechanisms of cognition.”

This discovery is built on a decades-old technology.

“Surprisingly, perhaps, these light-gated pumps had been discovered almost 40 years ago,” said Boyden.

“We tried them out sort of on a whim, not knowing if they would work, and to our great surprise they worked better than many of the molecules that we thought would be good,” he recalled. “So yes, it was interesting that a resource that was out in the open and ignored, turned out to be fantastic!”

A few more-recent discoveries revved up the action, however.

Boyden and collaborators at Stanford University and the Max Planck Institute introduced the first “optogenetic” technique in 2005 — so named because it combines the use of optics with gene delivery. The tool, known as “ChR2,” involves a light-activated ion channel; it allows light to selectively turn on neurons in the brain. It is now in wide use.

In 2007, Boyden demonstrated that halorhodopsin, another light-sensitive protein, could inhibit the activity of neurons when illuminated.

“The genomic diversity of the world suggested that more powerful tools were out there waiting to be discovered,” Boyden said.

His group then screened a diverse set of microbial light-sensitive proteins and found the new multicolor silencers. The newly discovered tools are superior to the old. Arch-expressing neurons can be switched off with greater precision and recovered faster than halorhodopsin-expressing neurons, allowing researchers to manipulate different neurons with different colors of light.

From Trial to Diagnostic

While the potential for success is practically written in digital neon, it will be a while before these “super silencers” will be ready for human use.

“I hope that over the next three to seven years, we will acquire the necessary safety and efficacy data,” said Boyden. “Right now, we are doing preclinical testing of these reagents, as well as the devices to make them work efficiently over the long term in vivo.”