Imagine the paint on your house powering the electric devices inside it. 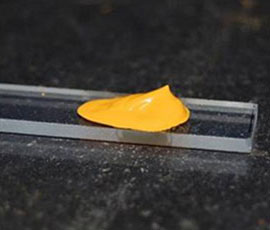 Solar paint developed by researchers at the University of Notre Dame.

That’s a possible application of some research being conducted at the University of Notre Dame’s Center for Nano Science and Technology.

A team at the center lead by Chemistry and Biochemistry Professor Prashant Kamat has found a way to create a kind of solar paint that uses nanoparticles to create energy from light.

“The universities are important centers for energy innovation, and this is an exciting and interesting lower cost solution for solar generation,” Carolyn Campbell, a research associate with Greentech Media, told TechNewsWorld.

Solar paint isn’t a new idea. In 2008, the Corus Group announced it was working on a kind of photovoltaic paint, using layers of dye and electrolytes, that could be applied in several layers to sheets of steel during the manufacturing process. That, though, is very different from what Kamat’s team is doing.

To create the solar paint that the Notre Dame researchers are calling “Sun-Believable,” they suspend nano-sized particles of titanium dioxide coated with either cadmium sulfide or cadmium selenide in a water-alcohol solution to create a paste that can brushed onto any transparent conductive surface.

“We want to do something transformative, to move beyond current silicon-based solar technology,” Kamat said.

“By incorporating power-producing nanoparticles, called ‘quantum dots,’ into a spreadable compound, we’ve made a one-coat solar paint that can be applied to any conductive surface without special equipment,” he added.

While the team has proven the concept underlying their solar paint, more research is necessary. “Just because it’s a research breakthrough doesn’t mean it’s a market breakthrough,” Campbell explained.

“It’ll be awhile before a product like this actually gets to the market, and even when it does, it will likely be limited to residential and small commercial products,” she added.

One of the challenges for the researchers moving forward is to increase the efficiency of the paint. Right now, it can only convert 1 percent of the light that hits its surface to energy. That’s not very competitive to solar cells based on silicon that have 10-15 percent efficiency rates.

The solar paint’s inefficiencies could be offset by the lower costs in producing it. “This paint can be made cheaply and in large quantities. If we can improve the efficiency somewhat, we may be able to make a real difference in meeting energy needs in the future,” Kamat said.

Improving the efficiency of the quantum dots used by the team compared to quantum dots already in the market was an immediate goal for the team, he explained.

“Carefully designed quantum dot solar cells yield more than 5 percent efficiency,” he told TechNewsWorld. “Our short-term goal is to boost the efficiency from 1 percent to 5 percent and make it competitive.”

The nanoparticle paste used in the research described in an article appearing this week in the journal ACS Nano was the first step in obtaining a photoactive layer, he added.

When the paint is finally ready for primer time, homeowners won’t be the only possible beneficiaries of the technology. “The simplicity of the method allows application for other commercial applications such as handheld devices,” Kamat noted.

“Just think of the back of a cellphone that can be coated with solar paint so that one can charge it with sunlight,” he said, “and since semiconductor nanocrystals can be obtained in different colors, one can also tune the desired color in the visible spectrum.”