Child Laborers Mine for Cobalt Used in Tech Gadgets 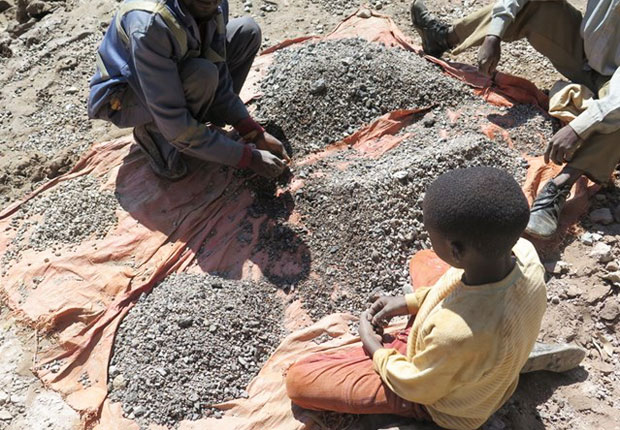 The companies have failed to make basic checks to halt the practice, the report claims.

The report traces the harvesting and sale of cobalt in the poverty-stricken Democratic Republic of Congo — where children as young as seven work the mines — for use in lithium-ion batteries that power smartphones and electric cars.

The extracted cobalt is sold to Congo Dongfang Mining, which is a unit of China-based Zhejiang Huayou Cobalt.

Amnesty said none of the firms contacted could provide documentation to prove where their cobalt originated.

DRC a Huge Supplier of Cobalt

Half the world’s cobalt comes from the DRC, and Huayou Cobalt sources more than 40 percent of its cobalt there, according to Amnesty.

There were at least 80 documented cases of artisanal miners dying in the southern DRC between September 2014 and December 2015, the report notes.

Miners typically put in 12-hour shifts for US$1 to $2 a day, based on researchers’ interviews with a total of 87 current and former workers, including 17 children.

Huayou sold cobalt to three battery component makers — Ningbo Shanshan and Tianjin Bamo of China, and L&F materials from South Korea — who bought $90 million worth of cobalt from Huayou in 2013, Amnesty said. 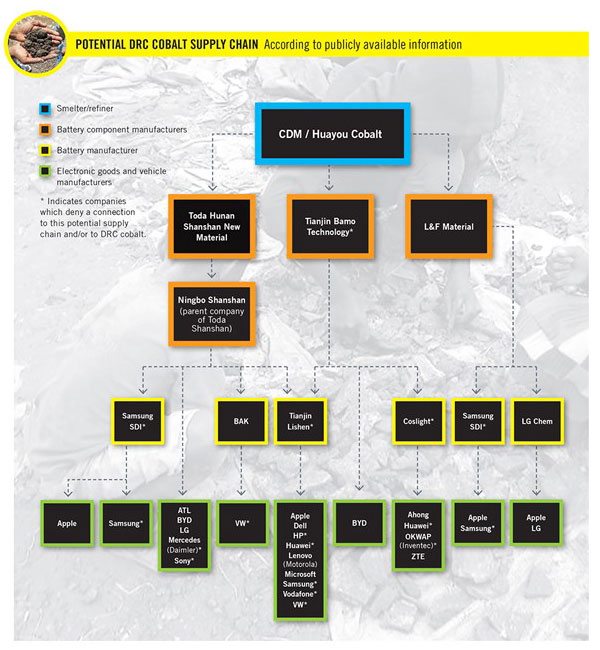 “Underage labor is never tolerated in our supply chain and we are proud to have led the industry in pioneering new safeguards,” Apple wrote in a letter to Amnesty International, which was provided to TechNewsWorld by Apple spokesperson Ben Kobren.

“We not only have strict standards, rigorous audits and industry leading preventative measures, but we also actively look for any violations,” the letter continues.

Any supplier hiring underaged workers must fund the workers’ safe return home, fully finance their educations, continue to pay their wages, and offer them jobs when they reach legal age, Apple told Amnesty.

Apple has been auditing workers for 10 years, and out of 1.6 million workers covered in 633 audits in 2014, a total of 16 cases of underage workers were found — and all of them were addressed successfully, Apple maintained.

Ningbo Shanshan was not one of Daimler’s suppliers, according to spokesperson Andrea Berg.

The company neither sourced directly from the DRC nor from suppliers in the DRC, she told TechNewsWorld, adding that its supplier standards impose strict obligations on working conditions, social and environmental standards, and business ethics.

“These standards are an integral part of the contracts that Daimler concludes with its suppliers,” she told TechNewsWorld.

Samsung SDI does not have any transactions with Huayou Cobalt, the company said in a statement provided to TechNewsWorld by spokesperson Joann Cho.

The company operates its S-Partner Certification Program as a way to diagnose and improve corporate social responsibility issues across its supply chain, it said.

For all suppliers, Samsung SDI conducts written evaluations and on-site inspections in areas such as human rights, labor, ethics, environment, and health and safety on a two-year basis, and awards them with certification, the company noted.

The DRC is listed in the U.S. Department of Labor’s Worst Forms of Child Labor report, and goods made under those conditions are listed in the Trafficking Victims Protection Reauthorization Act.

“An effective lasting solution to a complex problem such as this is going to require a collaborative approach with government, civil society, subject matter experts and multiple industries,” Deborah Albers, vice president of social and environmental sustainability at the Electronic Industry Citizenship Coalition, told TechNewsWorld.

Companies must operate in full compliance with the laws of the countries where they operate, the EICC said, and the fight against the use of child labor is the responsibility of everyone involved in the process.