This week starts the biggest U.S. trade show of consumer electronics. CES is held every year in Las Vegas, which is kind of poetic given that it is the city of unrealized hopes and dreams. We will soon see how many vendors hit the mark and how many miss their target.

Apple’s shadow hangs over the show and at least one vendor, Samsung, is planning to take the fight to Apple. I’m expecting to be disappointed in most of the tablets, overwhelmed again in the automotive section, buried in iAccessories, and to see a bunch of smart stuff that is likely a smarter than the people running the country.

However, giving credit where it is due, the U.S. president and Congress got an impressive amount of stuff done this month, which may bode well for 2011, if they can keep it up.

I’ll close with my product of the year: Yes, it’s the iPad, because nothing I can think of did so much to change how so many people thought about personal technology.

2010 was a great year for Microsoft. It launched Kinect, its new Xbox interface, and folks were even adapting it for PCs and “World of Warcraft.” It had a very successful ramp with Windows 7, and its IE9 browser beta took the lead in technical achievement.

Windows Phone 7 started a move against the iPhone, but in tablets Microsoft was little more than a no-show. Given my own selection for product of the year and Microsoft’s position as PC king, this was a huge miss.

At CES, Microsoft is expected to finish the sentence it began in 2010 and talk about its view of what tablets should be and where Windows is going. This may bury or redefine the company in the minds of consumers for this decade, and a lot is riding on it wowing this crowd. No pressure, no pressure at all.

Samsung plans to really take the fight to Apple and will have products that match each of Apple’s key CE offerings, from phones to iPod-touch-like MP3 players, to tablets.

Samsung arguably had some of the strongest phone and tablet Apple alternatives at the end of 2010 and clearly plans to turn up the heat and have roasted Apple for Christmas by the end of the year.

We’ll know shortly whether Apple will turn Samsung into Apple sauce, but clearly Samsung is making a fight of it.

This is AMD’s big coming-out party for its strategy to change its battle with Intel.

AMD bet the company in moves that had it acquiring ATI and selling off its manufacturing to Global Foundries in order to better compete with Intel. There will be the largest number of laptops — yes, laptops — ever fielded with AMD technology thanks to AMD’s Fusion strategy.

This is huge for the company that has bet its future on finally stepping out from Intel’s shadow.

Intel, in an effort to expand its market, will be showcasing smartphone, tablet and smart TV products at the show along with its latest blended processor, code-named “Sandy Bridge.” For Intel, this is a chance to take the fight to the ARM vendors and show that the firm can give as good as it can take.

Billions are in play on this critical move, which was hurt somewhat when Google pulled Google TV from the show because it really wasn’t ready.

It will be interesting to see how Apple matches this new class of phones, as it doesn’t have the graphics IP to do the graphics side of this solution, which suggests iPhone 5 and iPad 2 could fall behind these high-powered products.

Nvidia needs to be seen as more than just a graphics company and this show will, if it plays out, allow it to do that.

At last year’s CES, Panasonic promised to show the benefits of its merger with Sanyo and showcase the next generation in energy savings technology. This is its blended solar + fuel cell system for homes, which could provide an affordable way for many consumers worldwide to drop off the electrical grid and save substantially on their energy needs.

Panasonic will have a lot of other technology at the show, but its move in alternative energy appears to have the most potential to give it a huge boost.

Dell will have its first real chance to showcase its coming line of smartphones and tablets. This will be its shot at stepping out from under HP’s and Apple’s shadows at CES, proving it can finally be a power in consumer electronics.

This is incredibly important to the company, which has seen its image hurt substantially during the prior decade due to missed opportunities and disappointing consumer electronics products.

Dell will be taking a big shot — we’ll see if it hits the target this time.

HP is another company that has had a lot of trouble getting out from under Apple’s shadow. Palm was the only company in recent years that gave Apple a near coronary at a prior CES — but unfortunately, Palm failed to execute.

Now HP has Palm, and this will be a second chance for both companies to prove they have what it takes to take the fight to Apple. Question is, will they showcase what they have coming in public or leave it behind closed doors for a future Apple- like secret launch?

Ford will be once again jumping out ahead of the crowd of car makers to showcase strong upgrades to its Sync offering, which is codeveloped with Microsoft.

Easier ways to get media in cars, networking in cars, and other advanced features will undoubtedly be part of what has become a big event for the company.

Ford stands out when it comes to car tech, and it plans to showcase its leadership again this year.

Audi will be giving Ford a run for the money. You may recall that it has one of the leading self-driving cars, and today a lot of folks who got DUIs over the weekend likely wish they had one of those.

Having a European car maker showcasing tech at CES is big, and it shows not only how important Audi believes consumer tech is, but also how important to car makers CES is becoming.

CES has a huge upbeat feel to it this year, as the nation and the world recover from some hard economic times.

While the show should likely move to later in the year — to reflect the need to keep key products that won’t arrive until the second half secret longer, and to allow those who are preparing for the show to enjoy their holidays — it remains the most important tech show in the U.S. and perhaps the world.

The Product of the year for 2010 is clearly the iPad. I even bought my wife one, and she too has become an iPad zombie and thinks it is magical. That was a big deal because she also loves her Kindle.

At Christmas parties, the tech most commonly discussed was the iPad — and I’ve heard few complaints among the massive number of raves for this product.

It truly has been transformational for a lot of folks, who undoubtedly will line up to buy the new version, which is rumored to be arriving in March. 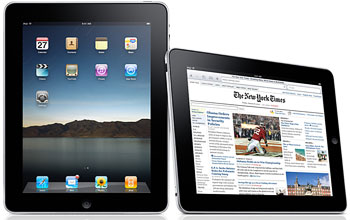 Apple outdid itself with the iPad. It stands above all other consumer electronics products in 2010 and, as a result, it is my product of the year.