Blown SpaceX Engine May Have Been Best of Bad Things 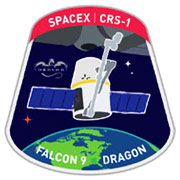 One of the nine Merlin engines of SpaceX’s Falcon 9 rocket suffered what the company called “an anomaly” after the vessel’s launch on Sunday. The “anomaly” looks a lot like one of the rocket’s nine engines failing in mid-launch, as can be seen in the slow-motion video below.

Initial data suggest that Engine 1 lost pressure suddenly and an engine shutdown command was issued, SpaceX said in a statement.

The Dragon capsule is expected to dock with the International Space Station on Wednesday.

About 1 minute and 19 seconds into the launch, the anomaly was detected on Engine 1, SpaceX said. Panels designed to relieve pressure within the engine bay were ejected to protect the stage and the other engines.

The fairing protecting the engine ruptured because of the loss in pressure. Neither the eight other Merlin 1 engines nor the rocket stage of the Falcon 9 were affected.

The flight computer recomputed a new flight path in real time as it was designed to do, to ensure the Dragon capsule would be placed in orbit for rendezvous with the space station.

Dragon will begin its approach to the international space station on Wednesday. It is scheduled to splash down again on Earth Oct. 28.

The engine anomaly occurred “about the time that the Space Shuttle reached what is called ‘MaxQ,’ where the aerodynamic forces on the spacecraft are at their absolute maximum,” Ben Corbin, the spokesperson for Astronauts4Hire, told TechNewsWorld.

It could be that a faulty valve caused an improper mixture of fuel to oxidizer in the combustion chamber, Corbin speculated. This would have caused a drop in pressure

Falcon 9 shuts down two of its engines to limit accelerations to 5 Gs, so the rocket could have lost another engine and still complete its mission, SpaceX said.

“The fact that the Falcon was still able to reach orbit safely despite [the anomaly] is overwhelming evidence that SpaceX knows what they’re doing and that they have had safety, reliability, and robustness of design in mind since the beginning of their design work,” Astronauts4Hire’s Corbin remarked.

“A systems-level analysis could uncover bigger problems,” Corbin pointed out. “Considering the rocket was near MaxQ, I think what they experienced was as bad as it could get, or pretty close, which is good, because even with that engine failure they succeeded.”

SpaceX will continue to review the flight data to understand the cause of the anomaly.

Neither SpaceX nor NASA responded to our request to comment for this story.