Bloodstained Makes Its Mark on Kickstarter 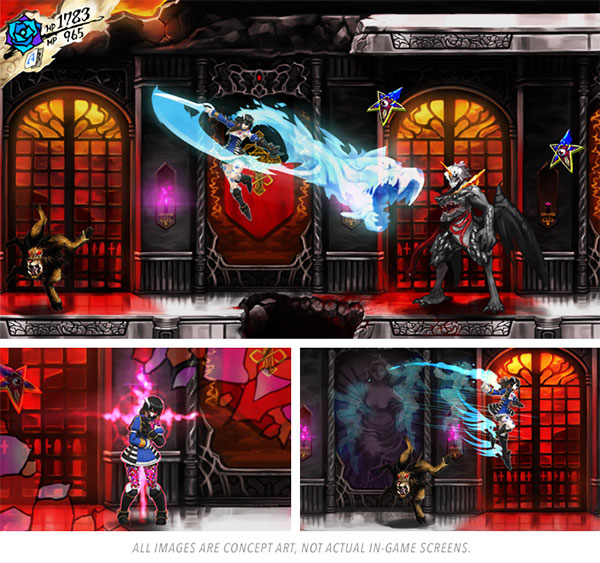 Castlevania producer Koji Igarashi’s Bloodstained: Ritual of the Night has drawn more than three times its US$500,000 base goal in roughly two days on Kickstarter. While the concept and its art already have attracted more than $1.5 million in support from fans, there’s still a winding road ahead before the game goes gold.

Animated by the spirit of Castlevania’s past, Bloodstained is a 2.5D platformer with RPG and crafting elements built around it. Now that it is funded, the next step will be to make the game available in physical and digital form for PC, PlayStation 4 and Xbox One. A Wii U release has been all but ruled out, but there’s still a chance.

Players will take on the role of Miriam, an orphan who has been afflicted with a curse that starts to crystallize her skin. Miriam is challenged with battling her way through a castle filled with the forces of darkness, as she tries to reach a longtime friend afflicted by the same curse as she.

Inti Creates, the studio behind the upcoming Mighty No. 9, is leading the game’s development. Long time Castlevania composer Michiru Yamane will set the game to music.

Considering the enthusiastic response on Kickstarter, Bloodstained appears well on its way to commercial success. However, there’s still a rough road ahead for the indie game.

One of the key challenges for any crowdfunded project is delivering on its promise, said Joost van Dreunen, cofounder and CEO of Superdata Research. Bloodstained will be no exception, and execution of all of its promises will be vital to the success of the game and any sequels.

Though crushing funding goals may be glamorous, it’s often more difficult to publish and release a video game without the backing of a major publisher.

“Sticking to the schedule will be doubly important, because startups simply don’t have the financial buffer to survive a big delay or other disruptions to development,” Van Dreunen told TechNewsWorld. “As a rule of thumb, it is important to remember that money is never really the challenge, but execution is.”

Igarashi, aka “IGA,” had pitched the game to several publishers, all of which declined to fund it, before going the crowdfunding route, noted Christine Arrington, senior games analyst at IHS.

Igarashi’s reputation has fueled the strong backing the game has received, but the next level of funding and marketing could be difficult, she said.

One solution to Bloodstained’s need for marketing could be the platforms on which the game is released.

“Considering its focus on next-gen consoles, it is likely that both Sony and Microsoft will chip in and help promote the game,” suggested Superdata’s Van Dreunen.

“Both Sony and Microsoft have recognized the cultural and monetary value of indie games,” he noted, and due to the popularity of the team behind Bloodstained, the game looks poised for success.

“The added promotion may propel it even further,” he added. “Of course, this is contingent on Igarashi delivering on this promise.”

The team behind Bloodstained initiated the Kickstarter campaign primarily to fund the game’s stretch goals, such as local co-op and a new boss fight.

Stretch goals are just the beginning, the team promised, and those who continue to power cash into Bloodstained can partake in a trove of memorabilia.

The combination of building the game out with new features and giving collectibles to top-tier backers could help groom the Castlevania fan base as Bloodstained’s most valuable marketing component.

“I think success in the broader market for this title is really going to depend on creating a game that the core fan base is extremely happy with,” said IHS’ Arrington, “and they become the evangelists for the title, bringing in more of their social network.”