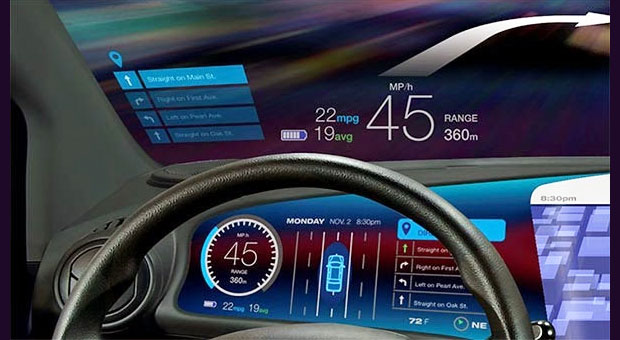 In a couple of interesting briefings last week, BlackBerry announced that its turnaround was finished, and Microsoft finally provided some information on its new connected car deliverables.

One strange thing was that after CEO John Chen excitedly pointed out that BlackBerry had displaced Microsoft in Ford, he then announced a strategic initiative to work more closely with Microsoft’s Azure platform on BlackBerry’s own market-leading QNX car operating system. That showcased not only the massive changes in both companies, but also the really strange way this market is evolving.

I’ll close with my product of the week: a very low-cost wearable smartphone display that could get you through your next dentist appointment or boring sermon.

With all the focus on the coming autonomous car and on BlackBerry’s old phone business, most don’t know that QNX, the operating system that BlackBerry acquired, is dominant in the car market, largely for car operations. To give you an idea, it currently is in 60M — yes, that’s million — cars. It is ranked No. 1 in telematics and automotive software entertainment, and its main advantage is that it just works and continues to meet all of the car companies’ start of product deadlines.

Chances are that if you like the software running the different parts of your car, it is QNX. The car companies like it because it is very secure, their own software developers know it (it’s been dominant for a number of years), and it works on both 32- and 64-bit hardware platforms from folks like Intel, Qualcomm and Nvidia.

As you’d expect from any modern system, it is set up for over-the-air updates, similar to Tesla. In effect, QNX has become the equivalent of Android or Windows, but for the car — and it dominates the segment.

BlackBerry introduced the Karma folks at the briefing to talk about their most advanced offerings. Karma is what became of Fisker — the firm that tried, with some significant drama, to compete with Tesla. (Karma also showcased why Tesla’s decision to use Panasonic batteries turned out to be brilliant.)

Karma’s current car is physically identical to the Fisker Karma, with the exception that all of the electronics have been revamped completely, so it now is reliable. (I was an old Jaguar mechanic, and given the issues the Fisker had with its electronics, I’ve always wondered if they were done by Lucas electrics, which were almost always at the heart of Jaguar reliability issues in the 1960s and 70s.)

However, I spoke to the Karma executives at the event, and their point was that it took them only 15 days to bring up the software on their redeveloped car. (By the way, the new Karma is about US$140K, and it is still a looker.)

BlackBerry currently is pivoting to support the next generation of technology, which includes autonomous vehicles.

Microsoft has changed a lot over the last several years, since Satya Nadella has been running the firm. I really didn’t get that initially, so the company had to set up a special retraining meeting. I had covered Microsoft for so long that my brain apparently was hard coded to think of it in just one way — and it isn’t that company any more.

Microsoft’s big push with automotive is with Azure now, which is a good thing, because its in-car efforts over the last two decades weren’t that great.

I actually had an AutoPC for a number of years. It was very advanced for its time, but truly flawed — so much so that my wife still threatens to throw something at me — and in those early years it was the AutoPC — if I ever suggest something like that again.

To be fair, that product was crippled by an underperforming processor — but I have to say, there is no misery like having a GPS system that can’t navigate at anything exceeding 25 miles per hour. Of course, I put the AutoPC in her new car, not my own, which in hindsight likely wasn’t that wise. (Yes, I’m also often surprised I’m still married.)

You see Tesla — particularly when it pulled an Apple and got hundreds of thousands of pre-orders for a car that wouldn’t arrive for years — woke up the traditional vendors with a holy crap moment. Now they realize that if they can’t provide some level of better-connected support in the next few years, they’ll likely be gone.

Those companies don’t trust Google at all, for the most part, (which is largely why Google had to spin out its own car effort), and they appear to be more comfortable with Microsoft than with Amazon.

Both BlackBerry and Microsoft have changed a lot, and while BlackBerry is focused like a laser on operating systems and related services, Microsoft largely has pivoted to the cloud as its premier platform, and that means they can partner much more easily going forward.

In effect, the firms have pivoted away from each other in terms of focus — and that means rather than having a cage match to the death, they now can cooperate to create something far more powerful.

It is possible that with their combined autonomous car efforts, these companies could do together what neither firm could do individually, and thus dominate the next generation of ever-smarter cars. Go figure.

The Vufine+, which started out as a Kickstarter project, is basically a small head-mounted display, priced at around $180, that’s useful for watching video or looking at your PC, tablet or smartphone screen while you are moving about.

I wouldn’t suggest using this while driving, running or bike riding, though, as it isn’t a ton less distracting then holding up your phone when watching a video. It is a rechargeable device, but battery life is about an hour and a half, suggesting that if you want to use it longer you should carry a long USB cable and a cellphone booster battery.

There are some downsides: It isn’t wireless, and it works well only on your right eye (cables stick up if you put it on your left). Unlike Google’s Glass, which used a projector, this is a screen — so lining it up can be a tad difficult the first time.

However, Glass cost something like $1,500 and this is $180, so it is a great little device to figure out what works for you and what doesn’t.

Some people use their Vufine+ to see both their drone and what it sees, but my ideal use is in a dentist’s office where I can watch a movie while having my teeth cleaned and not be bored to tears.

At $180, if I accidentally lost it I wouldn’t be likely to have a coronary.

Oh, don’t forget headphones or earbuds — wireless if you don’t have a separate HDMI jack or headphone jack on your device — and be aware, your laptop may see an audio component in the device and switch your speakers to it so you can’t hear sound. Go into your control panel and switch that to whatever you actually want to use, or you’ll be listening to the sounds of silence.

The Vufine+ solved a problem for me: It gave me something that allowed me both to watch video and pay attention to the oral hygienist, transforming what always has been an incredibly boring experience (I get really tired of watching the ceiling fan spin) into a more interesting, far faster-moving one. As a result, the Vufine+ is my product of the week.