Big Robo-Bird Trains to Be Fastest on 2 Feet 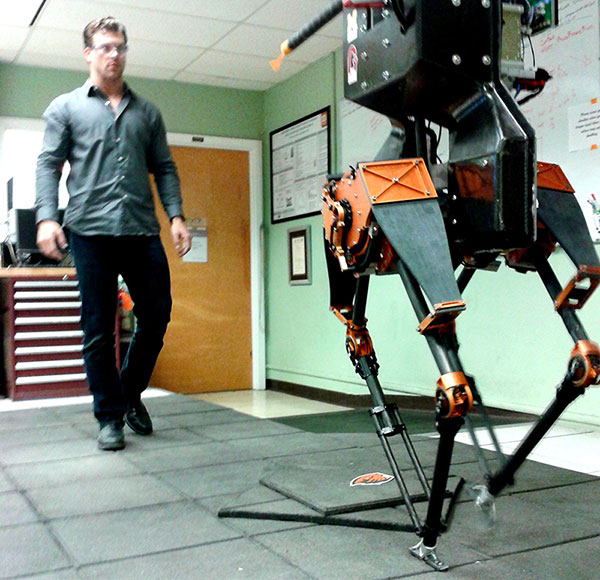 Becoming the fastest of its kind is just a byproduct of the ATRIAS robot’s primary objective. Oregon State University’s biped is the focus of a loftier goal: to build an entire industry on its leg locomotion mechanics.

ATRIAS (Assume The Robot Is A Sphere) has its origins at OSU, but there are three prototypes of the bird-like bot. The other two are in labs at the University of Michigan and Carnegie Mellon, the two institutions that collaborated with OSU on development of the robot’s controls, according to Jonathan W. Hurst, associate professor of mechanical engineering at OSU.

“There’s a ton of controls research to try to figure out how to make the robots run and walk correctly,” Hurst told TechNewsWorld, “and who knows what the right approach is — so we all have to try things.”

The researchers have been drawing inspiration for ATRIAS from birds, and the science will grow from there, he added, noting that they aren’t trying to specifically model birds, but it’s a good place to start.

“What we’re looking for are gate features of the running and walking behaviors that are universally true amongst a wide range of animals,” Hurst explained. “We’re looking for fundamental principles that are going to be true for all walking and running things.”

Legs to Stand On

ATRIAS is a tool that never will be used outside of a laboratory, Hurst said. Researchers are studying ATRIAS to document the science behind walking, so that other organizations can use the technology to further progress in their robotics development efforts.

“Once we understand and can write down the answers to ‘How do you make a walking and running machine? What are the important aspects of that? What are the principles behind it?'” — once we can write that down, then an entire industry can be built on leg and locomotion,” he said.

The data gleaned from researching ATRIAS could push robots out of the labs and onto the streets, where they could help out in peoples’ homes or be of greater assistance in disaster situations.

The research also could help to advance prosthetics and the development of exoskeletons to the point that artificial limbs would function almost like biological appendages, and people inside mechanical suits would feel wholly in control.

“So there are a lot of implications to understanding walking and running,” said Hurst.

There is an understandable fear of robots among the general public, especially among those who have read Nick Bostrom’s Superintelligence.

Not all fears surrounding robots relate to them becoming smarter than humans and quickly turning into cold, mechanical overlords. Many people fear job losses due to the efficiency of robots, for example.

However, they could have quite a different effect on human productivity.

“[Robots] will let us do more with our time,” said Susan Eustis, senior research at Wintergreen Research.

Most of the jobs that are alive and well today will be around tomorrow, according to Eustis — and robotics itself will grow into a huge industry.

“Every industry is being affected by robotics,” she continued. “There really isn’t anything that’s untouched by robotics: medicine, agriculture, military, police, border patrol. Robotics is a large industry, and it’ll provide people with more ways to do things.”

While there is some fear of the future robots might bring, there’s a lot of excitement about advances and a ton of money being pumped into the sector. From venture capitalists and entrepreneurs to government projects and corporate R&D, the money is there to develop robots and integrate them among humans.

With planes all but automated these days, people gradually are getting on board with the idea of driverless cars. Autonomous cars will break into the mainstream soon, and it won’t be long before bipedal robots do the same.

“Within our lifetime,” said OSU’s Hurst, “we’ll see robots walking around outside and starting to get around in human environments much more effectively.”