Beyond the Point of No Return: Is There Life in Black Holes?

Few ideas convey the mystery and awe-inspiring nature of space better than the black hole.

Dark, vast and little understood, black holes in many ways represent all that we still don’t know about the universe. With their seemingly infinite emptiness and general unexplorability, they’re also more than a little terrifying.

Imagine what it would be like, then, to learn that life exists in these expansive regions of no escape. Sounds like something from science fiction, doesn’t it?

It may not be quite as far-fetched as it seems, however. In a paper recently written for the Journal of Cosmology and Astroparticle Physics, Russian physicist Vyacheslav Ivanovich Dokuchaev proposes just such a possibility.

Black holes are essentially regions of space whose gravitational pull is so strong that nothing — not even light — can escape. It’s for that reason that the phenomena are called “black,” since all light hitting them gets absorbed, leaving nothing for the viewer to see.

Black holes can be either rotating or non-rotating, according to current theory, but either way, a “gravitational singularity” lies at the center. 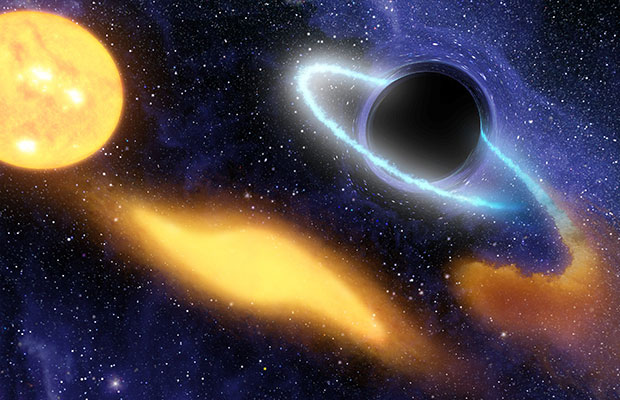 This artist’s concept shows a supermassive black hole at the center of a remote galaxy digesting the remnants of a star. NASA’s Galaxy Evolution Explorer had a “ringside” seat for this feeding frenzy, using its ultraviolet eyes to study the process from beginning to end. The artist’s concept chronicles the star being ripped apart and swallowed by the cosmic beast over time. First, the intact sun-like star (left) ventures too close to the black hole, and its own self-gravity is overwhelmed by the black hole’s gravity. The star then stretches apart (middle yellow blob) and eventually breaks into stellar crumbs, some of which swirl into the black hole (cloudy ring at right). This doomed material heats up and radiates light, including ultraviolet light, before disappearing forever into the black hole. The Galaxy Evolution Explorer was able to watch this process unfold by observing changes in ultraviolet light. The area around the black hole appears warped because the gravity of the black hole acts like a lens, twisting and distorting light. Credit: NASA/JPL-Caltech

Surrounding each black hole, meanwhile, is an invisible boundary known as the “event horizon” that essentially marks the point of no return. Anything that reaches a black hole’s event horizon is expected to get sucked toward its singularity, with no hope of escaping again.

Though much of our current conception of black holes comes from Einstein’s theory of general relativity, there is a growing consensus that supermassive black holes exist at the center of most galaxies — including our own Milky Way.

As one might expect, the fate of objects that get sucked into black holes is not typically considered a happy one.

Possessing infinite density, the gravitational singularity is theorized to subject any matter passing through to a process known as “spaghettification.” That evocative name alone should be enough to strike terror into even the bravest of hearts, and with good reason, for it’s essentially just what it sounds like.

It’s conceivable, though, that living matter might be able to exist within a black hole without being consigned to that harsh and eternal oblivion.

‘Advanced Civilizations May Live Safely Inside’

So argues Dokuchaev, who suggests that there are stable, periodic planetary orbits inside black holes that neither begin nor end in the black hole’s gravitational singularity. Rather, they orbit around and around somewhere between the event horizon and the singularity without ever approaching the singularity or its life-threatening “spaghettifier.”

Such stable periodic orbits exist inside black holes for photons, and they may exist for planets as well, Dokuchaev writes.

“Advanced civilizations may live safely inside the supermassive black holes,” he explains. “Stationary observers may exist just as anywhere on the planet Earth … . The only thing needed is to put your vehicle or your planet to a stable periodic orbit inside the black hole.”

In this intermediate ground between the black hole’s inner and outer parts, then, there could be a safe ground for life to exist.

‘No One Really Knows’

It’s nothing if not a compelling theory, and science fiction books are no doubt being written even now about the intriguing possibilities.

For now, though, the unfortunate fact is that — like so many theories of its kind — Dokuchaev’s proposition is currently more or less impossible to test.

“It’s a conjecture, because no one really knows,” Paul Czysz, a professor emeritus of aerospace engineering with St. Louis University, told TechNewsWorld.

It’s almost impossible to guess what it would really be like inside a black hole, Czysz asserted.

“Even [Stephen] Hawking retracted his statement as to what the conditions would be like,” he explained. “All we know is that as you approach the edge of the black hole where the boundary is, the gravity is so high that even light can’t escape.”

Temperatures and pressure would probably also be extremely high, he pointed out.

“I don’t know if anything could survive,” Czysz added. “If it can, it would look like nothing we’d recognize here on Earth.”

Indeed, the “existence of periodic orbits may be necessary but is certainly not a sufficient condition in itself to sustain life — at least organic life as we know it,” agreed Manasse Mbonye, a professor in the physics department at the Rochester Institute of Technology.

For example, “you can have a stable periodic orbit, say, very close to the sun, but other conditions — like temperature and strong electromagnetic fields — would probably be too extreme to support organic life,” Mbonye told TechNewsWorld. “Some of these conditions are likely to be even more extreme inside black holes.”

On the other hand, “if one is talking of life forms that are not organic and which we obviously don’t know anything about, then our very ignorance about them puts no condition on where they can survive, including inside black holes,” Mbonye concluded.

Similarly, “even if this is correct, I would still have thought that this would be one of the most inhospitable environments for life I can think of,” Mario Livio, a senior astrophysicist with the Space Telescope Science Institute, told TechNewsWorld.

“We are not even certain if life can develop on a planet that orbits its parent star in an elliptical orbit, so life in this black hole environment that suffers from enormous tides appears to be rather far-fetched,” Livio explained.

Still, “examining these types of orbits could provide insights into the properties of spacetime in these extreme environments,” he pointed out.

However improbable Dokuchaev’s theory might seem, the fact remains that even on our own planet, life has been discovered in places where we never thought it would be possible, such as in volcanic vents at the deepest parts of the oceans, Czysz noted.

“No one thought animals could have been alive in that hostile area; we assumed they needed oxygen to metabolize,” he explained.

It turned out, however, that the organisms discovered could metabolize sulfur instead.

“No one would have postulated that until they saw it,” Czysz added.

So could life exist in black holes in some form, even one not recognizable to us Earthlings?

“Everything is possible,” Czysz conceded. “But is it probable? I doubt it.”