This could just as easily be “Beating Microsoft 101,” or “Beating ARM 101” — basically how to beat any vendor that is dominant in a particular market. There is a way to beat a dominant vendor, but it’s almost never by chasing that vendor from behind — unless you want to spend a ton of money. Apple didn’t beat Microsoft by tying to build a better PC, and neither Microsoft nor Sun ever beat IBM by building a better mainframe.

You beat a dominant vendor by being the first to get where the market is going or by doing something the vendor is unwilling to do to give the market what it wants. What I find funny is that so many companies seem to think they can beat someone like Microsoft, IBM or Apple by chasing them, and that never works. I’ll explain why this week.

I’ll close with my product of the week: an 8-inch Windows 8 Tablet from Acer that proves you can run Windows on a small tablet, something I thought impossible.

When I started out in tech, one of the first jobs I had was in competitive analysis. As part of my training, I studied General Motors — a firm that at the time had one of the largest competitive analysis budgets in the world, and one that had been spanked badly by Toyota and Nissan (then Datsun) in the 1970s.

GM could analyze a car down to the individual bolts in the steering system — and being concerned about the rise of the Japanese vendors at the time, it had done that with the Japanese cars. It would buy a Toyota and take a year or so to tear it down and analyze every part. It would then incorporate what it had learned into the design cycle, which was five years at that time, and that is why GM had cars like the Vega in the 1970s. They were very good copies of the crap Japan was making in the mid-1960s.

When Apple tried to build a better laptop or desktop box in the 1990s, emulating Windows/DOS specs, its hardware didn’t sell. Even though it ran very fast, it was always just a bit behind Microsoft and Intel.

Doing What the Vendor Won’t Do

This was the lesson of the iPod. Sony — which had been able to dominate with its Walkman because it owned a ton of media — was unwilling to make ripping easy. Ripping is the process of pulling a song off a CD and turning it into something that can be played on a digital player. As a result, while Sony made far better-looking MP3 players than Apple initially did, they were almost useless. Just getting the music on the device was nearly impossible, let alone navigating it once it was there.

Apple’s initial focus was on making the iPod easy to use. It was what the market wanted, and Sony — the dominant player — was unwilling to do what needed doing. Apple stole the market even though it was on life support as a result of years of mismanagement, while Sony was still a power player. On paper, Sony should have squished Apple — but Apple, using a business form of an Asian martial art, stepped around Sony and all but kicked it out of the market it had previously owned.

Microsoft tried to take a similar approach with the Zune. Apple, which had taken over the MP3 market, was unwilling to enable sharing — and Steve Jobs wasn’t a fan of TV, so it didn’t want to do video. Unfortunately, Microsoft’s execution was so bad that it was unable to get significant share before Apple was able to close that competitive gap.

Microsoft initially failed to provide video content, event though the Zune had a huge screen, and sharing only worked between two Zunes so it was almost never available. By the time Microsoft built an attractive product — the initial Zune was referred to as “the brown turd” — the battle was mostly over. Microsoft had a good strategy, the execution was abysmal.

The other way to circumvent dominance is to be first to go where the market wants to go. Smartphones were a huge risk for Apple because they could displace iPods. So Apple just went there first with the iPhone. (Actually, it tried first with Motorola’s Rokr, but that was its Zune moment).

It also realized that to be successful, smartphones had to be vastly easier to use and work better with the Web. The other smartphones were eventually going to go there, Apple just went there first and executed brilliantly, stealing the market once again.

With the iPad, it was as if Steve Jobs looked at Bill Gates’ vision for the tablet and realized that to work, the devices had to be lighter, have longer battery life, and be easier to use than Windows tablets — but they didn’t need to actually run Office. People used them for different things, and so he created the next-generation tablet himself, and once again stole the market. The iPad did more damage to Microsoft’s Windows market share than any Mac had ever done.

Going back, IBM had the first smartphone in the Simon; Philips had the first iPhone-like product but never brought it to market; Palm had an iPhone-like product years before Apple, but the then-CEO argued that a consumer-focused smartphone wouldn’t sell; Microsoft got both the Zune and the Portable Media Center to market, but they were underfunded and ugly — and don’t get me started on the names. Gateway and Dell had smart TVs long before Samsung, but they were very expensive and painful to use. HP had an incredible smartwatch in development years ago, but Mark Hurd killed it.

So you can’t just come up with the great idea first — you have to execute at a high level. Otherwise, you just become an industry joke rather than an industry success. Part of that execution is marketing, and the reason Samsung is kicking Apple’s butt at the moment is that it realized Apple was unwilling to go to big screens although an aging market wanted them. Samsung also brilliantly executed a marketing program with better funding than Apple’s. The combination is what has helped push Android to dominance and largely why it is kicking iPhone butt.

When this tablet came into the office, I immediately thought it was a Windows RT machine — but it isn’t, it is full-on Windows 8. It is 1.1 pounds without the keyboard and 1.96 pounds with it. The keyboard is particularly interesting because it is significantly larger than the tablet that nests beneath it. 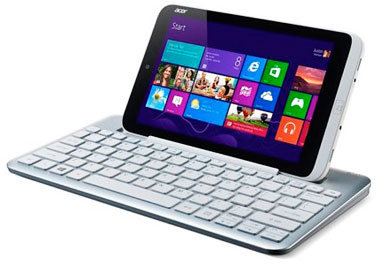 Tablets in this size class really aren’t for productivity, and I’d likely look for a smaller Bluetooth keyboard to use with it, but the combination actually worked rather well. The price is around US$430 — more than the iPad mini — but it does run full-on Windows, which means you can load office.

Battery life is 8 hours, thanks to the Intel Atom processor, and while this isn’t a game machine by any stretch of the imagination, it didn’t feel slow at all and was very usable.

I think products like this will really shine when Windows 8.1 ships later this year, as I was able run this side by side with the huge XPS 18 tablet — well, more of a portable all-in-one product — and with full app, file and personality syncing, the bended performance would be impressive.

In effect, you could grab and run with whatever screen size best fits what you want to do, and I’m using tablets for everything from sketching to working on my car now. I really didn’t think Windows in any form would work on an 8-inch tablet, and for proving me wrong, the Acer Iconia W3 is my product of the week.