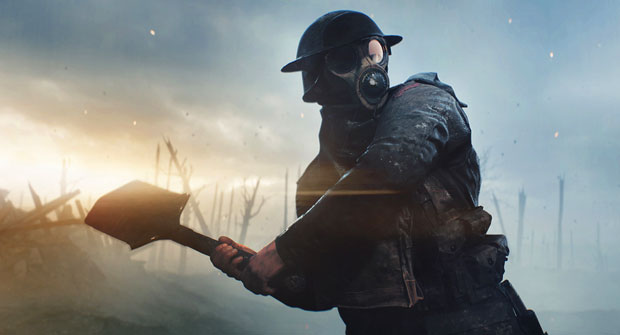 Electronic Arts’ new epic first-person shooter Battlefield 1 could be the war game to end all war games, based on the first wave of reviews published Monday. This latest title in the popular franchise from Swedish developer DICE is an action-packed, rip-roaring take on World War I.

There’s a single-player campaign that features a story worthy of The Young Indiana Jones Chronicles, which lets the player partake in key moments in the global conflict. There’s also intense online multiplayer action with support for 64 players.

As with past Battlefield titles, players can choose from a number of classes, each offering unique weapons and abilities to fight in the trenches. They also can control numerous World War I era modes of transportation, including bi-planes, tanks and even horses.

Battlefield 1 will be released on Oct. 21 for Microsoft Windows, PlayStation 4 and Xbox One.

Battlefield 1 highlights the attention to details in the weapons and equipment, while it further captures the intensity and at times the chaos of the First World War, the early reviews note.

“The horrors and heroism of The Great War are well told in War Stories, Battlefield 1’s campaign,” noted Miguel Concepcion for GameSpot. “It’s a more focused experience compared to prior Battlefield story modes of globetrotting and one-note powderkeg narratives. These new tales are organized in a non-linear anthology format that doesn’t need to be played in any particular order.”

This change may have been geared toward enhancing the gameplay experience, suggested Phil Hornshaw for Digital Trends.

“To some degree, these stories are tutorial chapters for multiplayer,” noted Hornshaw. “One focuses on a pilot and his gunner, giving players a chance to learn how to handle aircraft. Another is all about a tank crew, with plenty of time spent discovering how to best handle it.”

However, some took aim at the fact that the game — like the actual war — could result in times when it is difficult to make progress.

“For every cool moment I have in Battlefield 1, whether it’s bayoneting a soldier or chopping someone in half from horseback, I’ll be blown up by 20 tanks or be headshot by 20 snipers, and often it’s more frustrating than fun,” said Paul Tassi for Forbes.

Shell Blast From the Past

Battlefield 1 is a significant departure from the trend toward fictionalizing modern conflicts rather than historic ones. In fact, apart from a few strategy games and independently produced titles such as Verdun, game makers largely have ignored World War I.

It remains to be seen whether the trenches of Europe and even the sweeping deserts of Arabia are attractive enough to inspire interest among gamers looking for something different. World War I technology, though deadly, may seem antiquated compared to the fast-moving helicopters and accurate sniper rifles today’s gamers have come to expect.

“This is going to be a tough title to move, given the weapons, but for a dedicated player or one who wants to play a game that won’t favor twitch speed and youth over strategy, this may be the ideal title,” said Rob Enderle, principal analyst at the Enderle Group.

“Targeting these older players will be the key to success,” he told TechNewsWorld.

Another concern is whether this game may sugarcoat the horrors of the trenches. World War I generally is not romanticized, due to its association with mud-filled trenches, static lines, and at times hopelessness.

“It’s a game, and as such, it has little to do with the reality of war,” said military history writer John Adams-Graf, editor of Military Trader.

“But I suspect conveying the essence of suffering during World War I isn’t the intent of the game,” he told TechNewsWorld.

Rather, the primary intent is to provide entertainment to customers, and game designers are always on the lookout for new backdrops for that intent.

This time it happens to happen the Great War, Adams-Graf said.

“Will that have an impact on those who study the Great War or who perpetuate the memory of the 17 million who lost their lives, or the 20 million who became casualties during the war?” he pondered.

“I doubt it, but it can’t hurt,” Adams-Graf said. “Inspiration to study and understand history can come from the most unexpected places. Perhaps Battlefield 1 will inspire a whole new awareness of the international struggle, turmoil, destruction, and loss of life that occurred during the First World War.”