Barnes & Noble has introduced its new Nook — a more elementary, less expensive black and white WiFi e-reader device geared toward a simpler market and hoping to compete in the growing e-reader field. 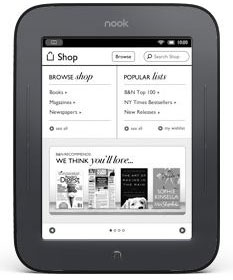 The new Nook unrolls with some key differences from its predecessors and competitors. Primarily, it features a touchscreen and offers a battery life of up to two months.

The device uses e-Ink, the same as the Amazon Kindle, to offer a book-like level of contrast and what some say is a more eye-friendly reading experience than a tablet or computer screen.

The release comes days after Liberty Media offered more than US$1 billion for a 70 percent stake in Barnes & Noble. With print bookstores suffering across the country, the bid to own such a large percentage of a major player in a sluggish industry is likely directly related to developing a competitive e-reader.

Amazon currently leads the e-reader market with its Kindle. The new Nook has the potential to become a true competitor, especially with its lower cost; however, many new e-reader devices are similar product-wise, and often it’s the content that keeps customers coming back to a certain brand.

“The market is being less and less driven by the physical device and has more and more to do with the content. Consumers are relying on previous positive experiences with brands and bookseller content to predict how they’re going to move forward,” Jeff Orr, senior practice director of mobile devices at ABI Research, told TechNewsWorld.

The company bills the devices as the most intuitive, easy-to-use e-reader — likely an attempt to market a new round of e-reader users, one that is less tech-savvy and engaged as the first round of buyers.

The market may now be ready for that type of simpler device for a crowd that isn’t willing to invest in a complex personal device.

“There is a group of people who are using traditional computing technologies today, and then those who say, ‘This is too complex for me, I need a simple solution.’ That audience is looking for a device that does one thing and does an excellent job at that, and the e-reader does that by being a replication of the book-reading experience and removing the complexity of that,” said Orr.

Keeping in line with the simpler approach, the new Nook has just one button — 37 fewer, Barnes & Noble’s Lynch bragged, than the third-generation Kindle.

“We also think that’s good for Barnes & Noble’s business as buyers of this device are likely to download more books than buyers of the Nook Color, which has many tablet features and distracts buyers from reading,” Young told TechNewsWorld.

The new Nook sells for $139, exactly the same as Amazon’s Kindle 6-inch WiFi version. It’s already available for pre-order but won’t begin shipping until June 10. It will also be available in Barnes & Noble retail stores as well as Best Buy, Staples and Wal-Mart stores.

Barnes & Noble declined TechNewsWorld’s request for further comment. Amazon did not respond to requests for comment by press time.