A set of supposedly leaked photos, along with a video posted on YouTube, have sparked rumors that bookstore giant Barnes & Noble plans to put out a branded e-book reader built by Plastic Logic.

However, close listening to the video reveals that the interviewee, apparently a Barnes & Noble employee, may have been speaking about a different Plastic Logic reader, due to be released next year.

That does not rule out a possible B&N e-reader, though, and rumors have been flying thick and fast on the grapevine, especially after the gadget blog Gizmodo published a set of professional-looking product shots it says depict the company’s new gadget. 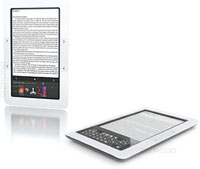 Heard It on The Grapevine

The video was posted by a user with the handle “JBruin San” on Oct. 8. It’s led to speculation that the branded e-reader will be unveiled at an upcoming Barnes & Noble event, to be held Oct. 20.

The new e-reader, according to Gizmodo, will have a monochrome screen similar to that on the Kindle 2. It will also have a second, smaller, color, multi-touch LCD screen beneath the primary one. The second screen will have a virtual keyboard and other features.

It is being made by Plastic Logic on an OEM basis for Barnes & Noble, and it will carry the bookseller’s brand, according to reports.

Say What You Mean to Say

Neither Barnes & Noble nor Plastic Logic would verify the reports.

“We have not announced an e-reader,” Mary Keating, senior vice president of corporate communications at Barnes & Noble, told TechNewsWorld. “Questions about Plastic Logic’s device should be directed to Plastic Logic. We’re the e-bookstore on both Plastic Logic’s and iRex’s devices.”

Dutch e-reader manufacturer iRex has offered an e-reader with a 10.2-inch display, a touchscreen with a digital pen, and wireless connectivity since 2008. Barnes & Noble announced in August that its e-bookstore would be available through the iRex e-reader when it’s launched in the United states later this year.

In July, Barnes & Noble announced that it will be the exclusive e-bookstore on a differnt Plastic Logic e-reader, which is scheduled to be released early next year.

The confusion may have come about because the Barnes & Noble employee recorded on the video could have been switching between discussing the bookseller’s e-reader app, which runs on cellphones and smartphones, and talking about a deal between Barnes & Noble and Plastic Logic that’s already been officially announced. Still, considering Barnes & Noble’s upcoming mystery announcement, Gizmodo’s photos make it hard to dismiss the arrival of a different, B&N-branded e-reader.

Plastic Logic’s forthcoming e-reader is targeted at business readers. It will measure 8.5 by 11 inches and weigh less then a pound.

The e-reader has a touchscreen interface and a soft keypad. It lets users directly load and manage Microsoft Word and Excel documents and PDFs. It is charged through a USB port. Plastic Logic is building proprietary software for the e-reader.

Plastic Logic will offer content from various publications in addition to e-books from Barnes & Noble. Later this year, Detroit Media Partnership, which manages The Detroit Free Press and The Detroit News, will test the Plastic Logic device and the Amazon Kindle.

Despite their statements, the spokespeople from Barnes & Noble and Plastic Logic were careful not to deny rumors about a branded e-reader outright.

Barnes & Noble has been coy about its Oct. 20 event, refusing to release any details. This, combined with the bookseller’s push into the digital market, may give credence to the rumors that it’ll launch its own branded e-reader.

Does this mean that if a B&N-branded e-reader is coming — and if it offers wireless downloads — then Barnes & Noble will go with AT&T, whose 3G service is notoriously spotty, rather than Verizon Wireless, which has a larger network? Perhaps the bookstore is eying the international market, Rob Enderle, principal analyst at the Enderle Group, told TechNewsWorld.

“A CDMA supplier like Verizon does have better coverage domestically but creates major issues if you want an international service,” he explained.