In an almost surreal scene, unprecedented numbers of euphoric people are mobbing America’s capital city to celebrate a new hope for a beleaguered nation. It is a celebration so huge that the bounds of reality cannot hold it in. For the very first time, the inauguration of a new president will be trumpeted in this world and another; in life and in Second Life.

There are those who would dismiss Second Life’s Inaugural Ball as a mere novelty, but it is more akin to the novelty of a first black president: It may be hailed for the moment as something sparkly and new, and, in truth, the initial moment may be little more than fanfare, but still the event marks an undeniable change in the future evermore. The effects cannot be predicted, much less measured. From this day forward, it is doubtful any serious political candidate will fail to represent in virtual worlds, particularly in Second Life.

Indeed, SL’s Capitol Hill was partially the brainstorm of a politician: Congressman George Miller (D-Calif.). “Congressman Miller and John Gage, a cofounder and chief scientist at Sun Microsystems, visited us with the idea of mirroring Capitol Hill on SL,” Steve Nelson, cofounder and chief strategy officer at Clear Ink, the makers of SL Capitol Hill, told TechNewsWorld. “So we built it and opened it to coincide with the opening of the 110th Congress, two years ago, when Nancy Pelosi took over as Speaker of the House.”

SL’s Capitol Hill opened with an official event immediately. Moments after being sworn into office in real life, Miller stepped to an awaiting computer and simulated the event on SL before an eager and waiting crowd. Interestingly, the crowd was not a who’s-who of nerds, but a congregation of business travelers, people too far away to attend the actual event, foreigners abroad, mothers without daycare, and the disabled. It was a meeting every bit as reflective of America as the crowd assembled in D.C.

“Capitol Hill in SL is a non-partisan thing and we did not build it for commercial purposes,” says Nelson. The non-partisan claim has been validated. Even the ever- controversial Former Speaker of the House Newt Gringrich (R-Ga.) has made a presentation and answered questions before a SL crowd.

Indeed, SL residents react to SL Capitol Hill as if it were the real thing. Protests held in D.C. are reflected in SL by protesters as adamant about the cause as the ones with concrete underfoot and hands wrapped around picket wood. 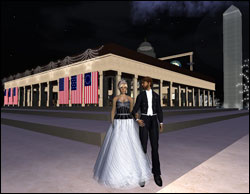 Obama’s Healthcare Transition team convened a Healthcare Reform Community Discussion in Second Life this month because they “recognized that Second Life allowed them to reach more people than they could in the real world, including people with disabilities that keep them from participating in person,” Harper says. He points to a report on the healthcare project by Second Life avatar Draxtor Despres, an award-winning filmmaker who files Machinima dispatches about Second Life for Frontline World.

Political action surrounding the Presidential campaign was at an all time high in SL.

During the presidential campaign, it was common to see yard signs, campaign posters and people wearing t-shirts for their candidates in SL, Harper says. “A lot of the political activity around the campaign centered on the Obama for President group and the Straight Talk Caf, which served as unofficial headquarters for a lot of Obama and McCain supporters in-world,” he says. “Places like those, and the Capitol Hill in Second Life, attracted people from all over the world who wanted to talk — in real time — about American politics.”

It comes as no surprise that in-world supporters want to hail their new Chief: President Obama. Nelson says there will be two celebrations: the official and ever-so-formal Inauguration Ball and another more informal “meet and greet” party. Tickets to both are free and available at SL dispensers in-world. You can even pick up a free tux or ballroom gown if you don’t have one or can’t afford one — that alone is a great equalizer for the public at large. But make no mistake; fashion is front and center of the event.

“There will be designers showing off their clothing creations at the ball,” says Nelson. “It is a prime social event.” There will also be numerous private parties, and of course, people selling memorabilia to commemorate the Inauguration.

The ballroom is roofless, since some residents can fly and prefer to make their entrance from above. The decorations are elaborate, festive and engaging. The musical director for the Second Life Inaugural Ball is Gabrielle Riel, the owner — and a DJ — of Internet radio station Radio Riel. She’s also a project manager for SL events; and an estate owner with three sims (regions).

“I want the music of the evening to represent the American experience and the diversity of the United States, as well as to have a joyous and celebratory feel,” she told TechNewsWorld.

Riel, an information technology training consultant who became involved in SL to explore the platform and research ways to use it as an effective distance learning/online training tool, says the event will start with classical pieces; the first set is music by the quintessential American Classical Music composer Aaron Copland, with his “Ceremonial Fanfare” and “Old American Songs.” The first third to half of the Ball will be Classical music from Leonard Bernstein, George Gershwin and other well known composers of American Classical Music.

“I will transition to Jazz about one-third to halfway through the event,” says Riel. “Here I will be able to feature upbeat and festive music from the artists that created and shaped Jazz from Scott Joplin to Duke Ellington, from Bessie Smith to Ella Fitzgerald. I do plan to include at least one set of ‘Chicago Style Jazz’ as a nod to the new President’s home state.”

Fanfare for the Common Avatar

To conclude the event, Riel plans to return to American Classical Music and Aaron Copland, and his piece “A Lincoln Portrait.” Copland added words from President Lincoln’s speeches and letters to this piece, which is very stirring. Riel feels “it will be the perfect end to the evening.”

As to the attendees, they are avid about the event for the most part. Some even prefer SL’s celebrations to those in the cold climes of D.C.

“I would like to attend the SL Inaugural Ball,” Cubsfan Pugilist, an active Second Life resident, who also organized Obama political rallies in Second Life, told TechNewsWorld. “I also got tickets for the inauguration in DC, but I don’t think I will be attending that. So I should be in Second Life.”