Atlas Robot Turns the Other Cheek 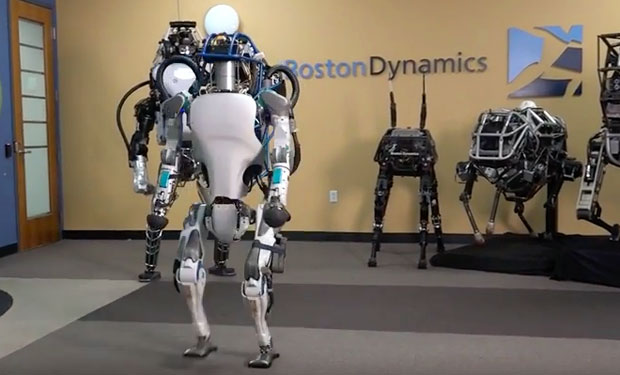 Google-owned Boston Dynamics on Tuesday gave the world a look at the latest version of Atlas, a bipedal robot that someday could threaten manual laborers’ livelihoods.

Boston Dynamics certainly didn’t say or imply that the fast-progressing Atlas robot would force humans out of their jobs. The clandestine group merely demonstrated the latest build of the bot, and gave it a cringeworthy battering to show how it responded to abuse.

The latest generation of Atlas is more compact than its predecessor even though it also is unleashed from the power tether that pumped life into its grandfather’s hydraulic limbs.

This current version is 5 foot 9 inches tall and weighs in at 180 pounds, compared to the previous Atlas’ 6 foot 330-pound build.

Atlas is featured in a demo video walking away from his stable mates and heading outside to showcase its ability to trek across uneven, snowy terrain. Later, the bot shows off its industrious side, and then allows its handler to torment it.

Atlas reclaims items knocked out of its grip and eerily springs back to its feet after being shoved onto its face. After enduring its human antagonist’s repeated assaults, Atlas is shown leaving the scene.

It was just last year, during the DARPA challenge that made Boston Dynamics famous, that none of the robotic entrants was capable of opening doors, as is this latest version of Atlas.

“This video counters some of the skepticism about how fast the field of robotics is moving forward,” said Aditya Kaul, research director for Tractica.

Still, it’s important to question just how controlled the environment was when Atlas was being filmed, Kaul told TechNewsWorld. One has to question if the robot would behave similarly in the real world, “without any preprogramming or preconditioning.”

They Took Our Jobs!

Big Dog, Boston Dynamics’ bot of burden, may hint at the future of warfare, as the four-legged robot marches up and down hills to the eerie songs of its hydraulic joints. That notion was, if anything, heightened by the fact that it was an entrant in a DARPA competition.

Though based on much of the same technology, Atlas is a different beast. It’s anthropomorphic proportions and humanoid build empower the robot to tackle tasks that typically are intended for humans, noted Wendell Chun, principal analyst at Tractica.

“This is natural, since everything in this world is built for and around humans: using hand tools, passing through doors for ingress and egress, ascending stairs, cooking, painting a house, and so on,” he told TechNewsWorld.

The human body can serve as a model for certain types of robot, but even though it’s a “remarkable work of nature,” Chun said, there are some inherent limitations to the human form.

It may be a good while before robotic adherents toAsimov’s laws find their place in the home, suggested Kaul. Atlas, et al, seem more suited to enterprise settings.

“Our thesis is that the most successful consumer robot that will have an impact on society as a whole will be the autonomous or partially autonomous car,” Kaul said. “By 2020, we forecast that 60 percent of all luxury cars will have some form of partial or fully autonomous capability.”

Still, Atlas may have taken a few steps down the path to welcoming humanoid robots into the workforce.

Getting a robot to balance on two legs and avoid obstacles has been a 25-year journey for Boston Dynamics, observed Chun.

Yet there is still a considerable amount of work to be done. For example, Boston Dynamics must find a better source of wireless power and a better means of reducing engine sounds to allow for stealthy operations, he pointed out.

“Robot mechanics, dynamics and control are continuously evolving,” Chun said. “The next big step is to incorporate the advancement of AI software to make the robot more capable.”

That’s something Google’s other divisions have been working on, through initiatives such as its self-driving cars and DeepMind artificial intelligence research.

“Processing hardware capabilities are still increasing exponentially, but it is the advancements in learning, reasoning and inference software that will push robotics to a new level,” Chun said. “When that day comes, we at least know that if the Atlas robot falls, it will be able to get up by itself.”