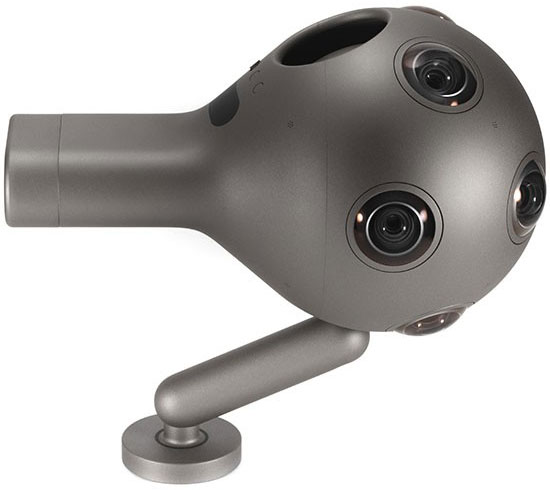 Nokia is clearly targeting a market a tier or two higher than the segmentYouTube andGoPro have set their sights on with the Jump VR platform, which is about a fourth of Ozo’s launch price.

Jump, a 360-degree, 16-camera rig, is Google on the software side and GoPro on hardware. Priced at around $15,000, it’s within range of indie squads of YouTube filmmaking troupes and is already making a home atYouTube.

Ozo, on the other hand, was purpose built for studios. The camera is wireless, with 360-degree audio and video and live monitor support.

While its price may be too high for many YouTube content creators, it’s low enough for studios that previously may have been hesitant to embrace VR because of the cost of equipment. Before the Ozo, experimenting with VR came at a high cost, Nokia said.

The technology will let content creators experiment with VR, the company said. Filming and postproduction are very expensive and time-consuming without a comprehensive camera that captures 360-degree audio and video in a single file and allows for instant playback.

It isn’t hard to look a product like Ozo and be floored by the price, said Eliot Winer, associate director of the Iowa State University’sVirtual Reality Applications Center. In the realm of commercial VR, however, it’s expanding the infant industry’s reach.

“When people are asked about VR and the kinds of experiences they want, travel and entertainment are always near the top of the list,” he told TechNewsWorld.

“Having high-end equipment like the Ozo will enable simulated experiences to be created” and “will truly show the kind of photorealistic visuals that can be done in VR,” Winer said.

With video games being the focus early on, many people still view VR headsets, such as the Oculus Rift and Samsung’s Gear VR, as toys for kids or gear for gamers, he noted.

“VR can do so much more, and products like the Ozo can extend this technology to produce rich experiences for people that they might not be able to do otherwise,” Winer said.

What gives the spherical camera its edge is its support for live monitoring, a must-have for film crews looking to produce movies and TV shows. Using a tablet or a computer, directors can view all of Ozo’s viewpoints from a single display.

The camera system is wireless, which keeps cords from cutting into the pure 360-degree audio and video feeds. To keep Ozo away from power outlets, the camera has been built out with interchangeable cartridges that will deliver about 45 minutes of juice.

For rendering, Ozo sends its audio and video streams into a single file. For compatibility, Ozo content can be published to any distribution platform and viewed on commercially available head-mounted displays, Nokia said.

Nokia is working with multiple partners to ensure compatibility of Ozo with major postproduction workflows and tools, the company said. During the launch, Nokia showed demonstrations of Ozo content on Oculus, HTC, StarVR and Samsung Gear VR devices.

“I’m excited to see the type of content it will be able to capture, and the speed with which programmers and app designers can get it to market,” he said.

“There is a lot of excitement for its use with commodity devices like the Rift or Gear VR,” Winer said, “but there are a lot of other devices and systems out there, from high-end ones” — such as the C6 at Iowa State University, the world’s highest-resolution VR system — “to 3D movies.”