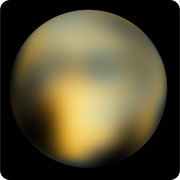 Pluto may no longer be considered a true planet following its official reclassification in 2006, but that doesn’t appear to be stopping the tiny dwarf planet from amassing a considerable number of celestial “followers.”

Just this week, in fact, a team of astronomers using NASA’s Hubble Space Telescope announced their discovery of yet another moon orbiting Pluto, bringing the total number observed so far to five. 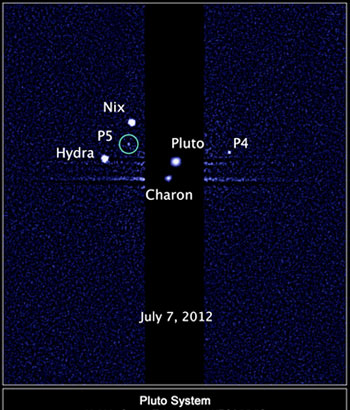 “The discovery of so many small moons indirectly tells us that there must be lots of small particles lurking unseen in the Pluto system,” said Harold Weaver, a research professor with the Johns Hopkins University Applied Physics Laboratory and a member of the team that discovered the new object.

The newly discovered moon is estimated to be tiny and irregularly shaped, measuring just six to 15 miles across and following a 58,000-mile-diameter circular orbit around Pluto.

“The moons form a series of neatly nested orbits, a bit like Russian dolls,” said team lead Mark Showalter, a principal investigator with the SETI Institute.

‘There Could Be Others’

“Given how unusual Pluto is, it’s remarkable that it has so many satellites,” noted William Newman, a professor in the departments of earth and space sciences, physics and astronomy, and mathematics at UCLA. “Conceivably there could be others.”

Indeed, “given that Pluto has been recently ‘demoted’ to the status of a dwarf planet, it is somewhat amusing that it now has no fewer than five moons!” Mario Livio, senior astrophysicist with the Space Telescope Science Institute, told TechNewsWorld.

The discovery is important in part because it helps scientists better understand the origins of our solar system’s Kuiper belt, in which Pluto resides, Livio pointed out.

Currently, the prevailing belief is that all the moons there are relics of a collision between Pluto and another large Kuiper belt object billions of years ago.

“The importance of this discovery is that it paints a picture relating to the formation of planets and satellites that argues for there being large numbers of such objects in the cosmos,” Newman told TechNewsWorld. “Insights that we gain here could provide better hints as to planet and satellite formation in general.”

From a more practical perspective, the discovery will also help scientists navigate NASA’s New Horizons spacecraft through the Pluto system when it makes its widely anticipated flyby of the distant world in 2015.

When the New Horizons spacecraft moves past the dwarf planet at a speed of 30,000 miles per hour, it could be destroyed in a collision with even the tiniest piece of orbital debris, such as one the size of a BB shot.

So, astronomers are using Hubble’s powerful vision for that very purpose, scanning the Pluto system to uncover potential hazards ahead of time.

“The inventory of the Pluto system we’re taking now with Hubble will help the New Horizons team design a safer trajectory for the spacecraft,” noted Alan Stern, associate vice president of R&D for the Southwest Research Institute’s Space Science and Engineering Division and the mission’s principal investigator.

The Webb telescope will be able to measure the surface chemistry of Pluto, its moons, and many other neighboring bodies in the distant Kuiper Belt.

“Without a replacement for Hubble, our pace of discovery and understanding will slow dramatically,” Newman pointed out.

Residing as it does out on the edge of our solar system, it’s not entirely surprising that Pluto has gained another moon despite its small size, Paul Czysz, professor emeritus of aerospace engineering at St. Louis University, told TechNewsWorld.

“The orbit of Pluto goes into the Oort cloud, which is filled with lots and lots of snowballs out there,” Czysz explained. “If you have something with enough gravity to grab something like Charon, it could certainly grab smaller things.

“It’s like a gravitational vacuum cleaner — if it runs into something, it can hang onto it well,” he added. “They’ll float into it and start orbiting.”

Back on Earth, meanwhile, ever-improving equipment is bound to result in more such discoveries, Czysz said.

“As these electronically steered mirrors improve in resolution, we’ll probably find a whole lot more,” he concluded. “We were pretty well nearsighted; as our prescription glasses get better, we’ll see more.”