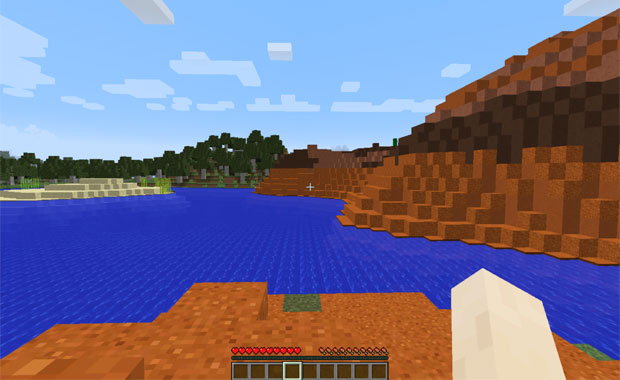 Microsoft on Monday unveiled AIX, a platform that its researchers have been using to turn Minecraft into an artificial intelligence learning environment.

Although Microsoft’s 2014 decision to buy Minecraft raised some eyebrows — the main criticism being that the game had run its course by then — the company has been putting it to some innovative uses.

The work with AIX, for example, can be likened to teaching an AI platform to survive on its instincts within an unfamiliar virtual world.

Microsoft has been working on AIX for about a year. It got its start in Microsoft’s Cambridge, UK, lab, where lead developer Katja Hofmann and her colleagues breathed life into it.

A five-person team at Microsoft Research’s NYC lab then began tinkering with the platform. Instead of using some of the linear or purely objective games other AI researchers have used, Microsoft turned to Minecraft.

The researchers weren’t interested in programming AIX to accomplish tasks in the building-block sandbox that is Minecraft. Instead, the team has been teaching the AIX to think critically and to perform actions organically, “using the same types of resources a human has when she learns a new task,” noted Microsoft Senior Writer Allison Linn.

The AIX research will help Microsoft advance a game that already has a well-established community, noted Mark Bunger, VP of research at Lux Research.

“Minecraft was very successful commercially before Microsoft took its stake in it,” he told TechNewsWorld, “and I think that’s another thing that’s really smart about this move for Microsoft.

Microsoft will make AI available to academics at first, but it will offer the platform to the open source community as early as this summer.

Its open-ended nature is what makes Minecraft such an intriguing game for the development of AI, according to Bunger.

Games like Chess and Go — go-to formats for designing AI systems — are much more structured than Minecraft, he pointed out.

“Those [games] have relatively few degrees of freedom — ways you can play and win the game — compared to Minecraft, which is closer to a construction kit than a game in the traditional sense of keeping score,” Bunger said, “and winning or losing.”

Minecraft became popular because, in addition to being “open-ended out of the box,” it was accessible from the beginning,” he observed. It was so accessible, that players could modify and change the rules and even the structure of the game.

“So it’s always been an open game in a lot of ways, even though it always wasn’t technically open source,” Bunger said. “Basically, by making this available for more people to tinker with, and especially in the context of a game that people love to tinker with, it’s a really smart move.”

Minecraft is a platform, he said.

At its core, it is about building blocks — and that’s consistent with a lot of the principles that have been driving AI forward.

“As we start making devices intelligent, what we’re doing is the culmination of everything we’ve done in the last 40 years with this industry,” McGregor told TechNewsWorld. “That’s creating intelligence, creating devices that can gather data — making intelligence of that data.”

Regardless of the forces pushing for and against AI, the fact is that the technology is a reality, said McGregor, adding that he doesn’t count himself among those who fear it’s a threat to the lives and livelihoods of humans.

“I’m excited to see a lot of the things they’re starting to get done, such as machine learning, deep learning and other ladders to AI,” McGregor said. “Running up to the next five years, it’s going to be a blast to watch all of the new innovations that come out.”