In the latest phase of its battle with Intel for the notebook and netbook markets, ARM has unveiled two new 2GHz capable Cortex-A9 dual core processor implementation.

However, it looks like this battle will only take place in the Linux corner of the market. Microsoft has said Windows 7 won’t run on these processors.

The most important thing about the announcement is that it was not about finished processors — ARM announced two Cortex-A9 MPCore hard macro implementations for the TSMC 40nm-G process.

In other words, the chips made from these are for small devices that cannot run too hot and can be sold at high prices. ARM is perhaps thinking of devices like set-top boxes and printers.

“There’s a lot more work to do on the architecture before it’s ready for general purpose processing,” Martin Reynolds, a Gartner distinguished analyst, told LinuxInsider.

Cranking Things Up a Notch

Here’s the problem with the macro implementations: They may be rated at 2GHz, but they may not deliver that speed.

“These are just the 800 MHz ARM cores running two and a half times faster,” Reynolds said. “If you just make the clock speed run faster, instead of doing more work, it spends more time doing nothing.” 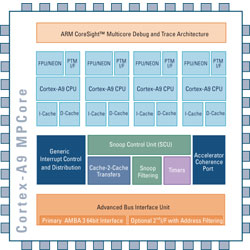 Diagram of the ARM Cortex-A9 MPCore
(click image to enlarge)

While each core runs at 1 GHz, meaning it executes 1 billion instructions per second, the DRAM can only process about 20 million transactions per second, Reynolds explained. [*Correction – Sept. 18, 2009] “You have to close the gap between the speed at which the processor processes things and the speed at which the DRAM delivers them,” he said. “If you double the processor rate but the DRAM delivers data at the same rate it did, you only get half the work done.”

No Window of Opportunity With Win 7

To get around the DRAM bottleneck, Intel and AMD use large caches and have very clever algorithms to figure out how to tell the DRAM in advance what the processor needs, Reynolds said.

“That’s where all the magic is in building new Atom processors, and that’s why they run Windows so well,” he explained. “Windows is a random app, and you never know what it’s going to do next.”

These architectural differences between ARM processors and those from Intel and AMD make it difficult for Windows to run on the ARM chips. “You have to do a lot of work to move Windows onto the ARM chip,” Reynolds said.

“ARM is a very powerful processor designed for small size and low power consumption, but it can’t do big things.”

Netbooks running Android could also be based on these chips, for which Google has expressed support.

“Open source software like Android and Symbian will run well on these chips,” Reynolds said.