Android Creator Launches a Phone of His Own 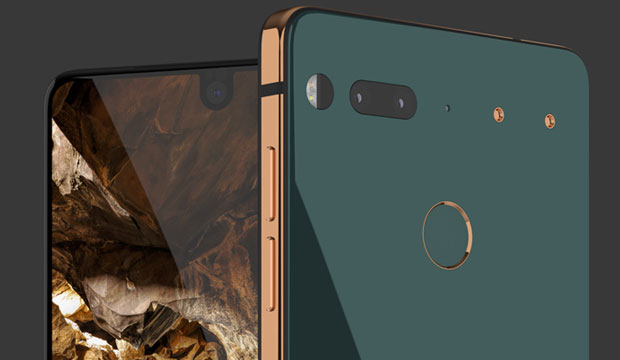 Essential, a company founded by Andy Rubin, the “father of Android,” on Tuesday pulled off the wraps on a new high-end smartphone.

The Essential Phone, priced at US$699, includes radios for connecting to all major U.S. carriers.

The unit has an almost edge-to-edge display (there’s a bit of bezel at the bottom of its screen) that wraps around the 8-MP selfie camera at the front.

Built around a Qualcomm Snapdragon 835 processor, the Essential Phone comes with 4 GB of RAM and 128 GB of storage.

For durability, the phone has a titanium and ceramic body, which allows it to survive drops with nary a blemish, according to the company.

Accessories can be added to the phone via a magnetic connector on its backside. Two accessories are included with the unit — a 360-degree camera and a charging dock.

Like some other high-end phone models, the Essential mobile doesn’t have a headphone jack.

In addition to its smartphone, Essential announced Home, a smart home hub. It runs on Ambient OS, an operating system that Essential hopes will become the Android of the IoT world.

Home is designed to tie together all the disparate protocols now in the space — SmartThings, HomeKit, Nest and others — as well as the various digital assistants — Alexa, Siri and Google Assistant — into a seamless user experience.

“I like that Rubin announced both the new phone and the home hub,” said Patrick Moorhead, principal analyst at Moor Insights and Strategy.

“It reinforces that the company isn’t just a point player, and that matters to distribution channels,” he told TechNewsWorld.

Despite the quality of its build and some intriguing features, the Essential Phone likely faces a tough road ahead.

“I have some doubts about the impact it can have without a big brand behind it,” said Bob O’Donnell, chief analyst at Technalysis Research.

“It’ll appeal to tech folks who want the coolest and latest and greatest, but I don’t see it becoming a mainstream product, so I think it will be challenged,” he told TechNewsWorld.

The audience for the Essential Phone may be limited, said Kevin Krewell, a principal analyst at Tirias Research.

“It seems to appeal to people who are suspicious of Google’s use of their data,” he told TechNewsWorld. “It’s also going to appeal to the tech elite who want something a little different.”

“The edge-to-edge screen is impressive and the materials are top notch — but the difference is the ecosystem and distribution channels the big companies have,” he pointed out. “I’m skeptical that it can make a significant impact. While the tech community is interested in it because it’s Andy Rubin, the larger market will not know who Andy Rubin is.”

There are those who have a more sanguine view of Essential’s prospects, however.

“If the new phone delivers on everything it promises, I believe it can compete,” Moorhead said.

“It’s vital, though, that there’s a very long road map of modules to connect,” he added.

The going will be tough for Essential, when you consider the money and marketing muscle that Apple, Samsung and Google have, Moorhead acknowledged.

“Then again, Rubin has considerable resources of his own and a reputation that overshadows at least some of the competition. If any entrepreneur could pull this off, Rubin can,” he said.

Essential’s assumption that there’s room for true innovation at the top of the smartphone market is appealing, said Charles King, the principal analyst at Pund-IT.

“The vendors in that space, particularly Apple, have been content to become providers of incremental improvements rather than forward-looking visionaries,” he told TechNewsWorld.

“If Rubin forces competitors to dig deeper,” King said, “so much the better for consumers and the industry.”