Last week was the coming-out party for AMD’s new CEO, and his core message was that the market was undergoing a shift — and when markets shift, leadership changes. His point was that Intel’s leadership was at risk and that AMD was poised to take over that leadership.

At the foundation of this argument is the nature of this change, which is massive, and I doubt we — I mean any of us — are fully aware of how much is changing. Nor are we sure which companies or technologies will exit this change. Everyone is at risk — from Apple to Microsoft, from Google to Facebook, from Oracle to HP, and from AMD to Intel. I’ll explore the nature of the change and some of the massive drivers that will make 2020 look nothing like 2012. I’ll close with my product of the week: Microsoft Surface, which uses an AMD processor, a unique Samsung screen, and touch. It has a game I’m now addicted to but can’t seem to figure out how to buy.

For the near term, technologies like touch, gaze (the ability to track your iris and use it like a mouse), and Kinect (camera-based interface) have been in the forefront. Last week, though, there was a huge breakthrough announced: the ability to map speech from the brain. Productized, this would replace keyboards and speech input by linking the computer to your auditory cortex. This is likely one of the first big steps to integrating technology into people. This technology will, when brought to market, have many of the advantages and drawbacks of telepathy.

Think of being able to ask a Siri-like application a question and have it delivered to your headset. Of course, if you can map output, how far are you from input possibly changing that headset? Of course, also think of the speed advantages of being able to write nearly at the speed of thought — and the privacy issues should this data stream be compromised. You could do real-time translation more accurately, and ambient noise and speech differences could be taken out of the equation for both voice command and speech to text.

Clearly processor-intensive and eventually pushing toward a surgically implanted technology, this points to a future when you no longer need keys on anything. You simply think about what you want, and it appears on a screen.

IBM is the one company in the tech segment that was both designed to last more a century and has done so. Its researchers were talking about the use of people as energy sources before the end of last year. This is the use of the human body as an energy source. This will be a critical part of getting technology that is installed in our bodies to work properly and yet one more critical step to better integrating people with the technology they use.

It may actually have some health advantages, in terms of driving exercise and movement. It may allow us to forever toss aside our wall warts, though it likely will make changing the batteries — which would be contained inside us at some future point — far more traumatic You’d no longer go to Radio Shack, you’d go to Kaiser Hospital.

IBM’s Watson technology is to Google what Google was to the Web. This is the first big step toward thinking computers. Watson more effectively blends the computational power of computers with information discovery. Incredibly compute- intensive, it is initially targeted at healthcare.

It promises a near-term future when you can list your symptoms, and it will provide you not only with a short list of likely causes, but also next steps to more tightly diagnose the illness and pinpoint the most effective cure. It could reducecompress months of testing to hours and reduce substantially the likelihood of misdiagnosis. It could take a massive step toward preventing the use of treatments that are more harmful than the illness. Watson just went to war against cancer.

The TV show Person of Interest showcases Watson’s other potential, as it is a major step toward being able to categorize emerging threats and point enforcement toward attacks before they actually occur. But where this also hits home is that when you are searching on the Web, instead of pages of results, most of which are useless, Watson promises a handful — all of which are pertinent.

We saw the true potential for the cloud begin to emerge with the OnLive Windows announcement in January. Running a full PC desktop at high resolution is now clearly possible, and that means computing as a utility — you basically pay for the performance you need, much like you do for electricity — is also on the horizon. This reduces the requirements for end-point performance and begins to focus client efforts exlusively on display, interface, wireless bandwidth and power efficiency.

It goes without saying that these new workloads are virtualized, and OnLive had to create specialized servers to handle them. These servers blend processing and graphics technology in ways that these desktop loads require, and their architecture is very different from conventional servers.

Wrapping Up: Back to AMD

So the future we are working toward will have an increasing amount of integration with people — this means embedded technology will be important. The initial thin-client-like devices will increasingly connect to servers that combine GPU and CPU technologies to create both more flexible and more intelligent machines that will need to be optimized for bandwidth and power efficiency.

Strangely enough, even though this wasn’t the change AMD called out, it may be better positioned to take advantage of it than any other chip vendor. It has both server and client efforts, it is well down the path of integrating CPU and GPU technology into something it calls an “APU,” and many of its new top executives come from IBM, one of the key computer companies driving this change.

AMD actually could ride this shift. The only question is whether it sees enough of it to execute. Rory Read has built a new team, but whether or not they are up to the task was a question left unanswered at the analyst event, which was long on promises and energy but short on substance. That question will be answered over the next 10 years, but we should have a better idea 12 months from now. As it is, the race to the future is on, the direction is clear, and AMD is preparing to fight for leadership.

Product of the Week: Surface II

Speaking of computing revolutions, the AMD-powered Surface table from Samsung and Microsoft has the potential to revolutionize family gaming.

Last week, I got hooked on playing a casual game on this table, and once again I want to buy one — the only problem is they aren’t sold to consumers.

While the product currently costs more than US$7,000, volume production could likely drop the price into smart-TV range and less than $2,000 in the near term future if the partners agreed to go after this segment. 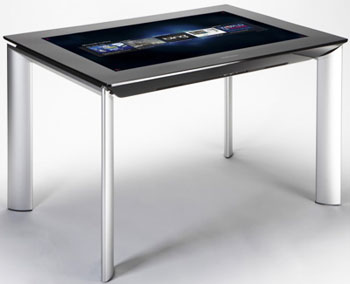 Board games blending 3D graphics could revitalize family game time, and the device lends itself to everything from virtual slot cars to virtual train sets and more traditional living room games like pool and cards, all visually enhanced.

I just don’t think Microsoft sees the potential of what it has created here, and if you get a chance to play with the current-generation product (with the technology built into the scree), check it out and let me know what you think.

Transforming table tops and windows into computer interfaces is also the future. Surface remains at the cutting edge and it uses an AMD part, so it is my product of the week. It has the potential to be a hit; one wonders whether it will be another missed opportunity.