OK, last week was a really interesting week. We had AMD basically divorcing itself from Intel’s model after living under Intel’s shadow from inception; we had Google repeating yet another of Microsoft’s greatest mistakes; we had IBM repeat a famous political debate by basically saying Oracle wasn’t an enterprise vendor anymore; and we had Harry Potter’s author begin to kill off publishers and book stores.

Each one of these is a major event and I couldn’t choose between them, so I’m going to touch on all of them this week.

My product of the week this week is Robopocalypse by Daniel H. Wilson, who has a Ph.D. in robotics and an endorsement from Stephen King. It’s a kind of scary view of our connected future that does a nice job of weaving in a lot of the technology I’m seeing from Cisco, IBM, Freescale, Intel, Apple, Nvidia, and Qualcomm.

So, in no particular order — well OK, alphabetically then …

For most of its life, AMD has lived under Intel’s shadow in a world Intel defined. There is no better example of this than the leading benchmark used to compare the two vendors. Created by BAPCo, this benchmark really defined what we looked for in PCs in the 1990s when AMD and Intel seemed to agree on what was important. The current version is called “SYSmark 2012.”

Well AMD decided it no longer wanted to play a game in which Intel had a huge advantage. It bought ATI so it could build a product that was, from its standpoint, more forward looking — one that could more naturally differentiate it from Intel.

That product family is called “Fusion,” and it is the blend of graphics and traditional processing power into a single part.

For AMD, a CPU benchmark isn’t the benchmark for this decade. A collaborative benchmark like SYSmark, representing the world of the 1990s and always tending to favor Intel, no longer makes sense. So AMD pulled the plug.

We are looking at yet another major step to take AMD out from under Intel’s shadow — and a major change in the PC space.

Google: There Isn’t a Microsoft Mistake We Won’t Repeat

Speaking of obsolete, the whole “don’t be evil” thing from Google went the way of the Dodo years ago. Its slogan should now be “there isn’t a Microsoft mistake we won’t repeat.”

The latest error on this hit parade: When asked to speak to the U.S. Congress on concerns surrounding antitrust, the senior executives pretty much flipped the U.S. government the bird and indicated that they just didn’t think such a meeting was worth their valuable time and offered up their in-house attorney instead.

Now they are facing an FTC subpoena and a more pissed-off congress.

Remember the whole “to heck with Janet Reno” thing that Microsoft did in the 1990s when its arrogance peaked and it thought it was more powerful than the U.S. government? That ended so well — with a consent decree and hundreds of millions in fines imposed by the EU and U.S. lawsuits from most states. In my opinion, it even drove Bill Gates out of Microsoft.

Why Google’s leaders would want to repeat this mistake is beyond me. Maybe they just like pain, or perhaps they’re the most incredibly street-stupid executives on the planet — but unless they lose the arrogance, this won’t end well.

When I watched Larry Ellison a year or so ago saying he wanted to turn Oracle into company like IBM was in the 1960s, it was pretty clear to me he had no idea what kind of a company that was.

This reminded me of a political debate back when Dan Quayle was running for the U.S. VP slot opposite Lloyd Bentsen, when he compared his experience in public life to that of John F. Kennedy. Bentsen shot back, “Senator, you’re no Jack Kennedy.” Think how much more powerful this would have been if the ghost of Jack Kennedy had shown up and said the same thing.

Well, Steve Mills effectively said this in an interview last week about Oracle, when he pointed out that Oracle existed entirely to augment Larry Ellison’s wealth and that Oracle’s behavior in pulling support from a major Intel/HP platform — Itanium — before it was replaced was not that of an enterprise company and particularly inconsistent with IBM policy.

IBM often supports obsolete platforms for more than 10 years AFTER they have been replaced. It is unprecedented to pull support before a product has been discontinued or replaced — and Intel has an active several year road map for Itanium in place. Basically, Mills said, “Oracle, you’re no IBM” — and he should know.

What’s big about this is that IBM broke the faith with IT buyers in the 80s, and while it took a few years, the firm went from the most well regarded to almost out of business (I was there at the time). It really looks to me like Oracle is actively trying for a repeat performance and that this time, IBM is positioning itself to be the big winner.

By the way, the No. 1 thing that Oracle customers likely want right now is for Ray Lane to come back and run the company again. Unfortunately, he is helping run things over at HP.

We already know that people are buying more electronic books than traditional books in total and that those who buy e-book readers tend to consume far more books as well.

We’ve wondered why you really need publishers and whether authors could just jump to selling their books directly now. Well J.K. Rowling is going to explore that with Pottermore a new website that will include an online e-book store, which will be the only place you can legally buy a Harry Potter e-book, starting this fall.

I’ve never read a Harry Potter book, largely because I couldn’t get one on my Kindle. Recently, I’ve noticed that many of the books I do read are published initially as e-books and may never be on paper (and they are great). I think Rowling is making a statement here and getting rid of the middlemen. This could be huge for the book industry.

AMD without Intel, Google the new Evil Empire and at war with the government, Oracle no longer a trusted enterprise vendor, and the beginning of the end of paper books and that entire ecosystem.

These are huge changes in a year; it is amazing they all seemed to happen in one week.

Product of the Week: Robopocalypse

Much of what we are currently exploring in technology surrounds the idea of having everything connected, and much of it intelligent. One of the approaches to dealing with what the future looks like, as I learned the other day from Intel’s Futurist, is a process called “science fiction prototyping.” (There is a book.) This involves telling a story based on the technology to get a sense for how it could all work together and where the problems might be. 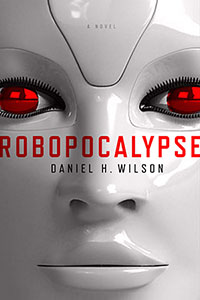 Robopocalypse is just such a story, and it is one hell of a science fiction thriller.

It takes place around 2070, when everything is connected. Cars can self-drive, personal robots are real, and toys are intelligent. A Skynet-like intelligence that we’ve created decides the world would be better with a lot less people.

If you want a sense of what the world might be like in the next 50 years or so — hopefully, minus the hostile AI — it is a really interesting read. (DreamWorks and Spielberg are supposedly making it into a movie to be released in 2013.)

Since much of my time is spent looking to the future, Robopocalypse is my product of the week.