TechNewsWorld’s All Things Appy has been taking a hard look at the apps that arechanging our lives.

Some of the best apps available take existing mobile phone functionality tothe next level, and all of our Top 5 featured here are outstanding examples.

Following is a snapshot of the five best free communications apps for Android devices.

Google’s Android OS apps can be downloaded from the Play Store.

Browse to the Play Store within the smartphone’s app drawer by clicking on the appdrawer icon. Then search for the app. 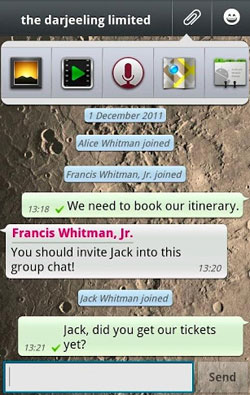 The attaching of multimedia to messaging alone is a good enough reason to get this app.

However, you can also chat and group chat as much as you want globally without paying intothe mobile networks’ SMS cash cow.

WhatsApp Messenger is available for iPhone, BlackBerry, Android, Windows Phone and Nokia — and all of those phones can message each other.

That has helped to propel the app’s mass adoption.

Free for the first year and US$0.99 a year after that.

Why the fee? The Whatsapp developers shout from the rooftops that they don’t sell ads: “At WhatsApp, our engineers spend all their time fixing bugs, adding new features and ironing out all the little intricacies in our task of bringing rich, affordable, reliable messaging to every phone in the world. That’s our product and that’s our passion. Your data isn’t even in the picture. We are simply not interested in any of it.”

This app lets you give out one number and have it ring on a mobile phone, at home,at work and so on — all at the same time.

You can listen in to voicemail, like with an old-schoolanswering machine.

You can block specific callers, and text over a data network rather than costlymobile SMS.

Skype, the grande dame of free Internet calling, took forever to migrate to the Androidplatform cross-network, but it’s now here.

Because it works globally, unlike Google Voice, which in many other ways offers superior functionality, Skype is in our Top 5.

Cheap peer-to-peer calls can be made via mobile data to classic landlines and mobilenetworks — bypassing mobile voice.

Android’s Skype app has the famous, freeSkype-to-Skpe calling that has let friends and families connect economically with eachother globally — many perhaps for the first time.

Tango is highly regarded for its stable free video calling over wireless and WiFinetworks, and it includes text messaging and plain old voice.

This app has widespreadhardware compatibility across Android devices.

It gets a runner-up position because it doesn’t have the landline connectivity options of othertelephony apps TechNewsWorld’s Top 5.

Where would we be without Facebook as we forge into 2013?

If Skype is the grand-dameof app-based telephony, Facebook is the head honcho of social networking. FacebookMessenger lets you social network fast with its app-based interface.

A recent update is generating complaints about failed notifications, and that plus theproprietary nature of this app, which TechNewsWorld frowns upon, make it onefor the runner-up pile.

However, kinks are likely to be ironed out in due course.