Listening to radio on a smartphone or tablet via headset is one of the killer features of the mobile platform.

In this week’s All Things Appy, we take a look at the must-have, free radio apps for Android, including ones for terrestrial and Internet-based radio aggregation, music, news and talk and public safety.

About the Operating System: Google’s Android OS apps can be found in Google’s Play Store. Browse to the Play Store from the mobile device’s app drawer. Then search for the app.

TuneIn claims 50 million to 100 million installs and has an average Google Play Store rating of 4.6 stars out of a possible 5 from 304,933 reviewers.

If you haven’t installed TuneIn on your mobile device yet, you’re missing out. This app lets you browse, search and listen to 70,000 live terrestrial and Internet radio stations from around the world. TuneIn also includes a couple of million podcasts. 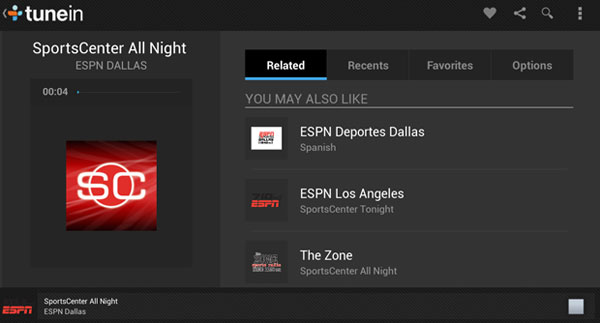 Features include account syncing, so you can browse and choose your favorites on the desktop and they will sync with Android app. Plus, related-station suggestions and recommendations round the app out.

Pandora claims 50 million to 100 million installs and has an average Google Play Store rating of 4.5 stars out of a possible 5 from 1,030,968 reviewers.

Free Pandora simply provides streaming music. It’s another mega-app, like TuneIn, that will substantiate the megabucks you pay your wireless phone provider.

Enter a genre or the name of a song, artist or composer and this app generates a custom radio-like station that plays like-sounding music.

This one is also syncable with desktop, allowing for easy station curating.

Stitcher claims 1 million to 5 million installs and has an average Google Play Store rating of 4.1 stars out of a possible 5 from 19,302 reviewers.

This podcast-playing app is a combination of Pandora and TuneIn, but for news and talk. Stitcher lets you “stitch” talk shows together to create a customized station, a la Pandora, and pulls together radio and news into visual playlists.

Features include browse by political persuasion; recommendations based on “thumbing up” what you listen to; a Listen on Demand function; and breaking audio news alerts.

Scanner Radio claims 10 million to 50 million installs and has an average Google Play Store rating of 4.4 stars out of a possible 5 from 85,481 reviewers.

Gordon Edwards’ Scanner Radio is for listening to over 4,000 public safety, weather and amateur radio frequencies from around the world, including police and fire dispatch and incident-based tactical communications.

Advantages of scanner-over-Internet, as opposed to scanner-over-radio waves, include being able to listen to a hometown frequency when away. A great example of app as superior technology.

Other tricks include listener threshold notifications for when a local agency’s comms are being monitored by significant numbers of people, indicating a major incident may be taking place.

iHeartRadio claims 10 million to 50 million installs and has an average Google Play Store rating of 4.4 stars out of a possible 5 from 160,561 reviewers.

Some terrestrial stations not found in our No. 1 position TuneIn app — like Power 105.1 in New York, for example — can be found here in the Clear Channel app iHeartRadio.

We’d have rather not had to include a second terrestrial radio streaming aggregator app in our top five, but the vagaries of a competitive broadcast environment means some key stations are exclusively found in this app, and not in TuneIn.