A controversial, game-changing claim published in a journal with a reputation some consider sketchy has the scientific community both praising and damning the reported discovery: fossils of bacteria embedded in meteorites from outer space. 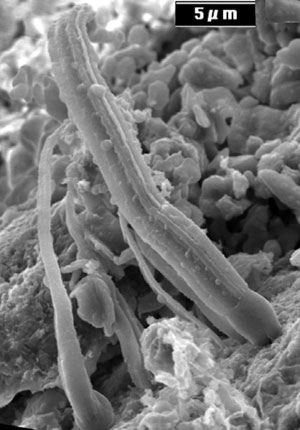 Image of permineralized remains in the one of the meteorites studied by Richard Hoover. (Credit: Journal of Cosmology)

A NASA/Marshall Space Flight Center scientist, Hoover published his discovery in the March edition of the Journal of Cosmology, an online publication edited by Rudolf Schild, Ph.D., who directs the Harvard-Smithsonian Center for Astrophysics telescope program.

The journal boasts a prestigious editorial staff that includes Sir Roger Penrose, an Oxford University astrophysicist and one of the world’s leading cosmological experts. Nonetheless, it’s being attacked as little more than a junk science repository by other scientists, including University of Minnesota biology professor PZ Myers.

“It isn’t a real science journal at all, but is the ginned-up website of a small group of crank academics obsessed with the idea … that life originated in outer space and simply rained down on Earth,” Myers writes on his science blog. “It doesn’t exist in print, consists entirely of a crude and ugly website that looks like it was sucked through a wormhole from the 1990s, and publishes lots of empty noise with no substantial editorial restraint.”

Ancient and durable, cyanobacteria — the name derives from their characteristic blue coloring — produce energy much the same way plants do: via photosynthesis, the sunlight-catalyzed conversion of carbon dioxide into nutritious sugars.

The filaments aren’t alive anymore, but are merely fossil remnants that — if indeed they did come from outer space — “would be a really, really cool discovery,” said Kelly Smith, Ph.D., an associate professor of philosophy at Clemson University who serves on a NASA panel assembled to consider the religious, social and ethical implications of discovering life in outer space.

“If Hoover is correct, these bacterial filaments would suggest that life evolved elsewhere — perhaps on Mars,” Smith told TechNewsWorld. “The discovery would take all the origins of life research and turn it upside down.”

Earth, Mars, and our solar system have been around for billions of years — long enough for a life to have evolved on another planet and then — as climatic or planetary conditions gradually became hostile — move to planet Earth, where perhaps conditions started out poor, but got better over time.

The life could have been humanoid, animal — or bacterial, Smith said. It would just have needed a way off the planet, and a family of rugged bacteria backpacking aboard an outbound meteorite might have survived the trip.

“These claims could also suggest independent origins of life,” Smith explained. “Life could have evolved independently here — and somewhere else, too. In that case, the whole creationism/evolution debate could get really complex, because such a scenario would suggest that life can arise more easily than we have long thought.”

Had NASA’s Hoover published his findings in a top-tier academic journal, some of the controversy might have immediately vanished. The Journal of Cosmology, however, “is a ‘junk journal’ to quote a person in cosmology and astrobiology whose views I respect” said Time magazine science journalist Michael Lemonick, who wrote about Hoover’s discovery and checked on the journal’s reputation.

That’s most likely because “scientists know which journals are top-tier, mid-level, and fringe,” Clemson’s Smith explained. “The information they publish, therefore, doesn’t affect scientists much. But it can affect the public’s perception of science and damage the integrity of science.”

Although Smith doesn’t advocate publishing prohibitions that would toss junk science into the trash, he does “worry about these things, because I deal with controversial philosophical issues like intelligent design and creationism. I just urge that people be a bit more skeptical and discerning about what they hear and read.”

As for Hoover’s claims, they have yet to be verified by other scientists. Until then, skepticism will likely reign.

“There’s always the chance, of course, that an apparently flaky view will turn out to be correct,” Time’s Lemonick said. “But then again, it might just be completely flaky.”