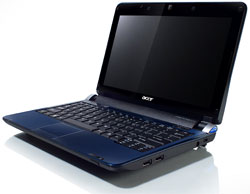 Acer Aspire One AOD250 with Android
(click image to enlarge)

Acer has announced details surrounding two hotly anticipated mobile devices running Google’s Android mobile operating system: the Liquid A1 touchscreen smartphone, which Acer first said it was developing when it joined the Open Handset Alliance earlier this year; and the Aspire One netbook, which is available for preorder at Amazon for US$349.99.

Aspire One will run both Android and Microsoft Windows XP; users can toggle back and forth between the two operating systems. It has a 10.1 inch screen and nine hours of battery life, according tospecs on Amazon. It runs on a 1.66 GHz Intel N280 Atom Processor and weighs 2.8 pounds.

Besides joining a select — but growing — universe of Android-based smartphones, the Liquid A1 is among the few built with a Qualcomm Snapdragon processor. Qualcomm demoed Snapdragon chipsets powering Android at the International Consumer Electronics Show this January, highlighting the graphics support, tight integration, low power consumption and connectivity capabilities.

Acer did not respond to LinuxInsider’s request for comment in time for publication.

The Liquid A1 and Aspire One join the growing number of mobile devices — particularly smartphones — that are using Android as the platform. In fact, Android is expected to be the No. 2 mobile platform within just a few years, according to Gartner.

Acer’s enthusiasm for Android comes as a bit of a surprise, Gartner’s Ken Dulaney told LinuxInsider. However, it “is a fast follower and is probably going into where it sees other significant activity.”

Eventually, he predicted, Acer will be a very minor player. “They have not yet established themselves in the smartphone area and have to build many relationships with carriers — and they are up against some very big players, such as Samsung and LG .”

Indeed, in many ways this is a story about Android — not Acer.

Android has become the platform to watch, Patrick Gilbert, president and CEO of 4SmartPhone, told LinuxInsider. “As far the other players are concerned, such as RIM or Nokia, I think it will certainly eat into their markeshare — and likely slowdown growth of popular phones like the BlackBerry.”

Android’s open platform could possibly best Apple with its closed, proprietary approach to the iPhone — and presumably whatever netbook product it eventually rolls out, Charles King, principal with Pund-IT, told LinuxInsider. 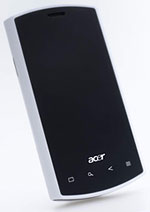 “We are starting to see increasing demand for smartphone and mediaphone devices built on Android,” he said. “Google’s decision to move forward with open source technology — that is, making it available to a wide variety of manufacturers — is beginning to pay off.”

For a while, the market believed that Android would only gain traction through the HTC line of smartphones provided by T-Mobile (the Dream, aka “G1,” and the Magic, aka “G2″),” said King — “butthat view is definitely pass now. The market sees Android as having great potential no matter who the carrier.”

Its openness will be a competitive differentiator against the iPhone in the medium term, he predicted.

Acer’s Liquid A1 will be joining a lineup of competing phones: There will be Verizon and Google’s Android product rollout, announced earlier this month; Sprint’s two Android phones, including its forthcoming Moment; and possibly a Dell smartphone built on the Android for AT&T Wireless.

Examples of Android based netbooks are fewer, but if demand and recent history are any guide, they are bound to proliferate as well.