Absolute Linux is a distro that raises the question: Is it really worth the bother?

Any version of this Slackware-based Linux OS is just that — a really big bother — unless you love Unix-like systems that give you total control. It likely would be especially bothersome for less experienced users and for folks comfortable with Debian distros such as Ubuntu, Linux Mint and such.

Some Slackware-based distros are easier than others to use — but the text-based installation and mostly manual operating routine makes using Absolute Linux a challenge. Once you get beyond the configuration steps, you still face a considerable learning curve to keep it running smoothly.

Clearly, I am not overly impressed with the Absolute flavor of Slackware Linux. I see it as the equivalent of driving a stick shift automobile with a crank-to-start mechanism instead of an automatic model with keyless ignition. That said, once you have the engine purring, it drives fast and furious along the highway.

I like to offer unique computing options in these weekly Linux Picks and Pans reviews, so I set my comfort zone aside and rolled up my sleeves to get my hands a little scraped reaching under Absolute Linux’s hood.

Absolute Linux version 14.2.1 has a larger footprint than previous versions. It no longer fits on a CD.

This distro is a lightweight modification of Slackware Linux, featuring IceWM and ROX for its window and file managers. It comes in a 32-bit and a 64-bit variants with most everything updated under the hood.

Since this release has no size constraints, developers included larger office applications like LibreOffice and Calibre in the base installation. Plus, Absolute includes several utilities that make configuration and maintenance easier. Just remember that “easy” is a relative term when it comes to Slackware distros.

Absolute 14.2.1 also has many common desktop and Internet applications installed. They are configured with tight integration of menus, applications and MIME types.

The installer program has an Autoinstall option, but the lack of a graphical interface somewhat belies the concept of automating the process. At best, it partitions and formats the drive. The applications and development libraries are more extensive than in previous releases.

The 64-bit edition makes GPT (GUID Partition Table) partitions if you are booting Unified Extensible Firmware Interface (UEFI). However, Slackware distros insist that you turn off Secure Boot in the BIOS if it is set.

The installation routine is a tough road to drive compared to other distros that provide a test run via a live session and click-to-install graphical interface. Absolute Linux has neither.

Absolute’s text-based boot prompt is very minimal. It can be very flexible for seasoned users, however. 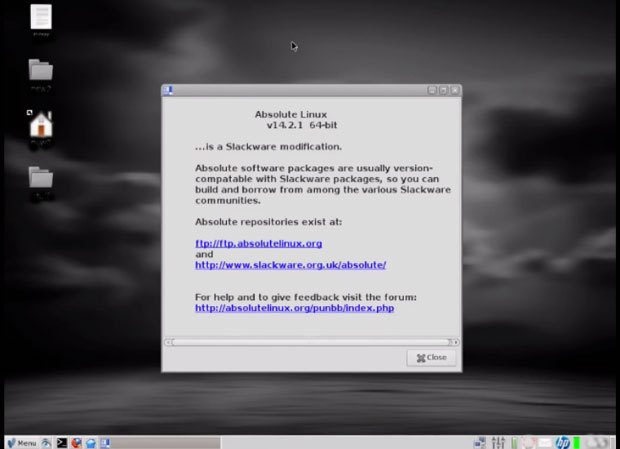 You can follow sometimes-vague directions to add extra kernel parameters. The basic automation mostly begins and ends with pressing the Enter key. You have to select a target drive, a keyboard layout and the installation source, and then configure various basic settings.

The installer script’s Autosetup feature partitions the disk and installs the operating system with few options. If you ignore some of the basics in telling the script what to do and where to do it, the process dumps you to a blinking cursor, leaving you to wonder what to do next.

Several other options in the text box provide little help. If you are not familiar with old-school installation procedures, you face a much higher challenge.

Absolute is focused on desktop computing functions such as Internet, multimedia, document processing and general home or office uses. Its lightweight nature makes it a good OS for keeping older hardware productive. Still, you can find better alternatives to putting Linux on legacy hardware.

To its credit, Absolute’s bare-bones desktop design makes using it easy. The menus provide speedy access to the applications. The programs are fairly standard Linux staples. 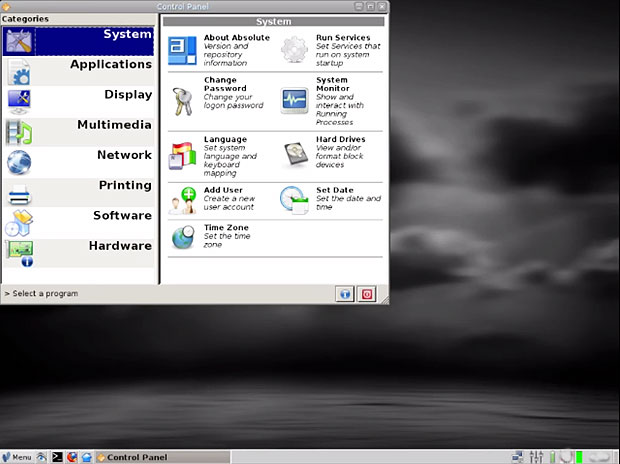 The desktop interface does two things well. One, the desktop serves as your portal to system monitoring and accessing system tools. Two, the desktop environment lacks bloated features. so it mostly stays out of your way. If you want the animations and glitz that GNOME and KDE and Cinnamon desktops provide, you will not find them here.

Absolute Linux runs a wide range of Slack packages. Some of the system tools include script utilities that let you configure and maintain the system in a semi-automated fashion. You also can do manual or text-file based configuration.

Absolute Linux gives you a clean and classic desktop. The traditional panel bar sits at the bottom of the screen.

The goal of this distro is to make computing simple and fast, so there’s little to distract you beyond the typical system displays in the notification area and the quick-access icons and menu button. 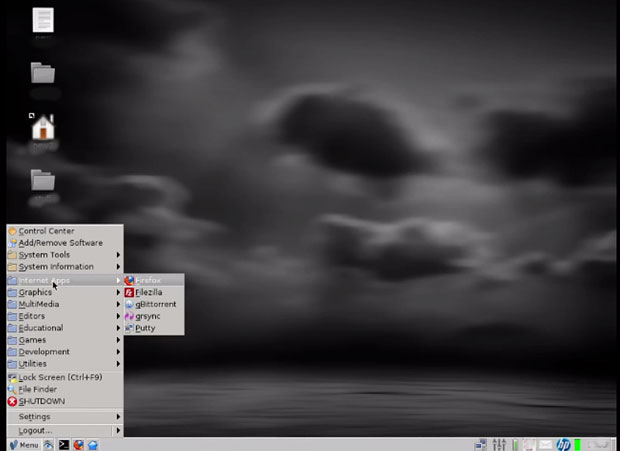 The appearance in general is a bit stark. You get a few scenic backgrounds splattered with colorful touches, but mostly what you see is dark and gray.

Even the menus are devoid of much color — but this bland scheme is in keeping with the lightweight no-clutter design. Absolute puts your attention on loading what you need and getting stuff done.

Absolute Linux version 14.2.1 provides numerous software and other technical improvements over earlier versions, but they’re likely to be lost on Linux users who just want a distro that works out of the box.

Experienced IT pros who relish the Slackware environment no doubt will find this latest Absolute Linux release a worthy platform. However, users who rarely, if ever, venture beyond GUI-driven systems and are stymied by Apt commands and text scripts will find Absolute a reach too far.