As wireless operator networks carry more multimedia traffic, they must solve a basic problem: how to ensure that each application receives the appropriate level of service. Each layer of a multilayer protocol is good for some applications but bad for others.

Today, operators can use a new “mediating” protocol — Digital Multimedia Protocol, or DMP — in place of TCP (Transmission Control Protocol) between the wireless handset and carrier network. DMP is specifically designed to enhance protocol efficiency so that each application receives the right level of service.

DMP monitors, classifies and manages each data type and its real-time requirements, and working with any application or service transparently “replaces” existing inefficient protocols for communication over the wireless link. In addition, DMP improves quality by helping adapt bandwidth to the link’s signal quality (RSSI).

DMP is able to streamline the application’s protocol between wireless handsets and carriers because it is able to determine the best way to maximize throughput on a per-application basis. The new protocol does not require any changes to the operating systems, firmware or protocol stack.

Why a New Protocol?

Mobidia decided not to use TCP over the wireless link because of the problem of tuning TCP stacks for particular channel conditions. This problem has been studied extensively over the last 15 years, and numerous papers describing various tweaks to the basic TCP protocol have been published.

Tuning TCP to fit each application requires different profiles for each application. Also, TCP is known to be congestion sensitive rather than wireless sensitive, and it does not offer any special features for the signaling plane.

Finally, TCP was designed to guarantee the reconstitution of transport in a changing path environment rather than to adjust to changes taking place in hundreds of milliseconds on a wireless network. By the time TCP reacts to such rapid changes in the wireless network, the issue it is reacting to has almost certainly changed, and in many cases it will take the wrong action.

Mobidia invented the DMP application programming interface (API) to satisfy the quality of service, scheduling, and policy enforcement and policing requirements for both uplink and downlink wireless traffic.

DMP is sensitive to the type of application, and it is wireless-network aware. It dynamically adjusts to the type of network and its current status in real time rather than in seconds like TCP.

DMP has both signaling and a data plane. The signaling is used for messaging, such as IP address-change event notification. DMP has a variable-length header based on the type of application, but the DMP common header size is only 6 bytes. DMP, thus, requires fewer transactions over the wireless network than TCP and frees up capacity over the wireless network and back haul.

DMP offers a standard and operating-system independent kernel and application-level API. Mobidia’s .wave (dot wave) software solution currently uses the kernel API is being used by to prevent any change to existing applications and the way they make calls to transport-layer protocols, including TCP and User Datagram Protocol (UDP). Applications requiring network resources are redirected to DMP.

DMP currently uses UDP/IP as a transport and network protocol; however, standardizing DMP as a wireless protocol would enable it to directly use IP. Newly-developed applications could employ the user-level API to invoke and use the protocol.

The characteristics discussed above make DMP an ideal and efficient protocol for wireless networks. DMP has both a signaling plane and data plane and is sensitive to application type and networks.

The protocol is efficient, yet it carries enough information about the application and network to provide increased visibility into customer and network issues. Finally, DMP results in enhanced throughput and increased network capacity.

The results of using DMP are dramatic. Figure 1 shows the difference in throughput and variability of DMP compared TCP in a laboratory EV-DO Revision A network. In the real world, where throughput is much lower, the difference between TCP and DMP performance is even greater. 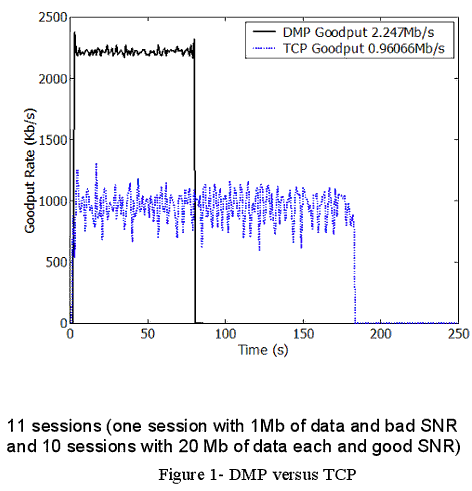 This approach enables carriers to prioritize and schedule different classes of service based on the available network — DMP does this right on the wireless device for the uplink (Mobile Node to Base Station) and through a gateway for the downlink (Base Station to Mobile Node).

Using the DMP solution thus results in improved uplink and downlink capacity, enhanced throughput, and better use of network resources.

Fay Arjomandi is chief technical officer for Mobidia.
Get Permission to License or Reproduce this Article