Researchers at Stanford University have created a new flexible skin-like material that has the ability to heal itself, which could pave the way for a new generation of prosthetics. Further development could also lead to regeneration of organs and limitless other possibilities.

Led by Zhenan Bao, Ph.D., a Stanford chemical engineer, the research team created a self-healing polymer that isn’t as brittle as other silicon versions of synthetic skin. More importantly, it has the potential to be more like real skin by offering enhanced sensitivity to touch. 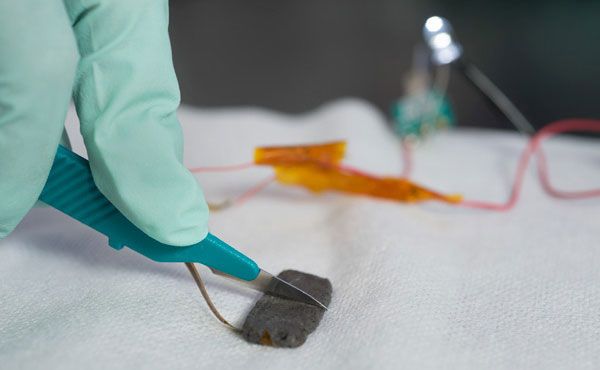 A small piece of the self-healing material is sliced with a scalpel. The researchers say the material repairs itself in about 30 minutes.

However, its greatest attribute may be the ability to self-heal when torn or cut. A report on the team’s work is published in the Nov. 11 issue of Nature Nanotechnology.

The Stanford team did not respond to our request for further details.

The Promise of Regeneration

The technology of self-healing polymers has been around for a while, but practical applications have been limited due to several drawbacks. The most notable is that to “heal,” the materials typically had to be exposed to high temperatures, which made them impractical for daily use.

Some materials could heal at room temperatures, but the process changed their mechanical or chemical structure, limiting their ability to heal to a single instance. Also, no self-healing material was a good bulk conductor of electricity, a crucial property.

The Stanford team’s breakthrough could pave the way for new possibilities that are much more than skin deep.

“This opens the door for regenerative medicine, [from] growing new skin to growing new organs,” said James Canton, Ph.D., founder of the Institute for Global Futures.

“Certain animals have the ability to regenerate limbs, but we don’t have that — but we’re trying to unlock the mysteries and mechanisms of how animals and plants self organize and self heal,” he told TechNewsWorld. “We don’t have the same abilities at present, but this is a huge effort in research to make that possible.”

No one should expect to sit out in the sun without sun block, get skin cancer, and then simply get synthetic skin as a replacement. Still, this technology is quickly going from the science fiction to reality.

“This is actual science,” Canton emphasized. “Stanford’s work in self-healing is in its earliest stages, and we don’t even have a model yet to see what is accelerated self-healing or slow self-healing. Stanford’s research is in the early stage, but it is the first step.”

Getting to the next stage likely won’t take that long.

“Without a doubt, this is the future — and it is something that we could see with real-world applications in three-to-five years,” predicted Canton. “This is the big era of big medical data with fast innovative changes.”

While the most obvious possible application for this technology is synthetic skin for much more realistic prosthetics, the technology could offer a vast range of possibilities for mainstream applications as well.

For example, after Bao and her team cut a thin strip of the material in half, then pressed it back together for a few seconds, it gained back 75 percent of its original strength and electrical conductivity. After about 30 minutes, the material was restored nearly 100 percent. By comparison, human skin can take days to heal.

“This potentially goes well beyond medical use,” said Rob Enderle, principal analyst at the Enderle Group.

“In different forms, it could be used for anything from clothing to upholstery. Think of longer-lasting self repairing leather, depending on its wear patterns. Because it is conductive and will translate information regarding what has been placed on it, it could be used for chairs that better conform to those sitting in them,” he suggested.

“Used in a sail, it could transmit information back that could allow for better sail positioning — think Larry Ellison’s race boat,” Enderle continued.

“As a vehicle wrap, depending on how well it took color, it could replace paint. Think of all the things that could use an easily repairable cover — from phones to children’s toys. This could be really big if they can get it manufactured for a reasonable price,” he told TechNewsWorld.

Another use would be in robotics, “where something that is touch-sensitive and self-healing would be huge in terms of building more human-like or functional robots,” Glen Hiemstra of Futurist.com, told TechNewsWorld.

“I’ve also been thinking about eventual space habitats and space clothing — for example, for the day when we do indeed go to Mars to stay. I would suspect that inflatable habitats made from a material like this — perhaps one that also generates energy — will be very likely,” he said.

“Future space suits will need to be skin-hugging and tight,” Hiemstra noted, “and the self-healing properties would be valuable for obvious reasons.”

Given the many possibilities, it could be something that is a true game changer in the relatively short term. It could lead to self-healing artificial skin and self-repairing vehicles. Electrical devices and wires coated with this material could repair themselves even when installed behind walls or in other hard-to-reach places.

“Self-healing polymers are part of the near future,” said Canton. “What is in the laboratory today is in the market tomorrow, and that is coming faster than ever before.”