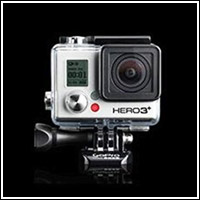 Despite having the most popular camera on the planet in the form of the iPhone, the odds of Apple pulling the rug out from under GoPro by building its own action sports camera system — even with using its forthcoming Apple Watch as a controller — are so low they stand in stark contrast to the hysterical selloff of GoPro stock this week.

News surfaced that Apple had received a patentfor a digital camera system that has a remote control that looks vaguely like an Apple Watch.

The patent specifically calls out GoPro’s older-generation HERO2 cameras as needing some improvement (to help justify the patent application).

The report, published by Patently Apple, gained enough steam to attract the attention of Wall Street investors, who promptly sold off their GoPro stock. The result? GoPro dropped 12 percent in Tuesday trading before rebounding slightly.

So what’s GoPro stock actually worth? I don’t care. What I do care about is whether Apple actually is going to produce an action sports camera.

A Sports Camera System of Its Own?

While I’m a fan of GoPro and can appreciate what it’s accomplished, I have to admit that having a simpler action sports camera system that I could control from my wrist via an Apple Watch would be pretty darn compelling.

Sure, you can use the GoPro app on your iPhone to control a GoPro mounted out of easy reach on your helmet, but you’re going to continue to burn battery, and you have to mess with your iPhone, too. For casual action sports camera fans — not wingsuit flyers or daredevils under contract with Red Bull — an Apple solution seems immediately attractive.

I must admit, I was pretty excited about the patent.

And then came the cold water.

Part of the patent came from Kodak IP that Apple acquired, while some of it also appears to be directly from Apple, too — but none of it actually means Apple will build and sell any of it. Apple was granted 2,003 patents last year alone, and most of those patents never will get utilized in products for consumers. Why would this one be any different?

While Apple could manufacture an action sports camera system that could be controlled by its forthcoming Apple Watch, I’m having a hard time believing that it could happen any time soon, if at all, for three reasons:

In this sort of situation, the patents Apple holds are more a shield against competitive litigation than a blueprint for a product to be built by Apple. Just saying. As much as I want Apple to produce wearable and mountable camera systems, I believe the odds of it happening any time soon are slim to none.

Besides, for the videos I want to record with a GoPro or other action camera system, I’m going to need an Apple Watch that is waterproof, not water resistant.

Of course, I hope I’m wrong. In fact, I wouldn’t mind seeing a dual-lens camera system that offers optical zoom — which is one of the latest iPhone 6s camera rumors floating around — making it into an action sports camera.

I just don’t believe there is any reason to get excited yet, much less put off buying a GoPro in order to wait for Apple to build its own. And more to the point, as Apple itself has said, “there are a thousand no’s for every yes.”

An Apple action sports camera to rival GoPro is far more likely to be one of those thousand no’s.