The market is in a planning cycle, and analysts are being asked to take a look in their crystal balls and describe what 2013 will look like. Clearly, we will have more bandwidth, 3-D TV will be ramping, and most of us will either be using tablet devices for something or moving to the next big thing.

I’m going to look out to 2013 and make some assumptions and then paint a picture of what the world will look like through the eyes of someone who is on the cutting edge of technology. I’m picking cutting edge because that is where the most change is likely to be.

I’ll close with my product of the week a set of headphones that make gaming vastly more immersive.

Today we are at the beginning of the rollout of 4G networks, substantially faster than 3G. With improvements to both roaming and bandwidth management, we’ll be more- and better-connected in vastly more places than we are now. However, we aren’t just looking at wireless; Marvell this week launched a networking product called AVANTA, which promises to bring 10 gigabit networking into the home — that’s 100 times the speed most of you likely have today.

For those connecting wirelessly, 4G means accessing programs and media where and when you want them at HD resolutions and with much less lag and delay. The change for the digital home will be greater, because you’ll be able to get multiple HD streams, do HD video conferencing from your home, and get that 3-D program you want where you want it.

After the DreamWorks presentation a few weeks ago, I really thought we would have to wait until 2018 before we would see a true ramp to 3-D, largely because the active shutter glasses that are currently needed are too expensive. However, at the Marvell event, 3ality Digital showcased a professional JVC flat panel display that was actually very good with the far less expensive Dolby 3-D polarized glasses that they give you in theaters.

I now think that 3-D, using these passive glasses, could ramp more quickly and that 2013 could be the year of that ramp. Affordable TVs that don’t require glasses are likely still out until 2018, but given we can use the polarized glasses in regular theaters and as dark glasses, we should see a nice ramp much earlier now.

I mentioned the Audi robotic car last week — by 2013, it should have been up and down Pikes Peak several times. While it is unlikely we’ll have driverless cars by 2013, having more robotic devices in the home is certainly more possible — vastly better Roomba-like vacuums, for example. Like it or not, we will have more robotic devices that are able to do more things in the home more effectively and, particularly for those who have functional disabilities, become the critical servants we need to get our day-to-day tasks done.

Much of the technology appears to be coming out of DARPA and the military, which is why we’ll likely see a bigger improvement near term than otherwise would be the case.

We should be on the third generation iPad and the sixth generation e-book reader (and we may not be able to tell the difference). Libraries of media should be largely cooked by then, and we should be much closer to the experience that we currently get with iTunes and Zune with a variety of media types.

Right now, we are at the beginning of a cycle of vendors going back to becoming vertically integrated. Apple, Microsoft, and Google have processing groups, and all three are increasingly dictating hardware. This week, Google even bought a company that appears to specialize in ARM alternatives for the data center.

It is likely that these major platform vendors will virtually own and fully control the hardware under their platforms. Even though they still may allow the brand of the firm that builds the device, the platform owners will control most of the related revenues and profits.

This should change the vendor landscape a great deal and favor those vendors that have enough of the related technology solution to fully control the entire related platform.

We are currently being mined for everything, and much of the work is going into indexing and improving the ability to find the result. By the end of 2013, we should have some very advanced tools to collect and aggregate posts by pattern, and quickly create a profile of someone based on what is available on the Web about them and what they have posted since they first got on the Web.

I can imagine a lot of really interesting conversations with job applicants, at termination meetings, or at performance reviews when this material comes to light.

Central Gaming/Computing: The Cloud on Steroids

This prediction would be better made after I get a chance to see OnLive working in June, but unfortunately, I can’t wait. Assuming OnLive works as advertised, the idea of centralized computing should be moving off of game consoles and onto the productivity desktop by 2013. We should be well along the path of high performance cloud-based computing, and while there will be more things we connect with, the performance we need in them is likely to drop as network-connected devices continue to evolve into connected appliances.

This potential change will make a lot of products obsolete and drive a lot of additional bandwidth needs, making that 10 gigabit network I started with even more critical.

2013 should be a time when those who buy on the cutting edge are leaving behind their traditional PCs for a raft of personalized devices and appliances that are connected to an ever more-capable cloud infrastructure that not only holds content, but also provides processing and graphics resources. If trends pan out, the world of 2013 will be an appliance world, with products like the iPhone and iPad easily eclipsing traditional Macs and PCs for those on the leading edge.

Technology will be helping us at home and increasingly helping us on the road — though not yet driving us. More homes will be built efficiently and use some type of alternative energy source like solar power or natural gas fuel cells.

We’ll be well on a path toward saying a near-permanent goodbye to paper-based books and devices that don’t connect to the network. It will be a brave new world.

This gives us something to think about while we all wonder how Apple continues to make great products with inferior parts.

I game more than I should, and it isn’t unusual for me to tell my wife on a Saturday morning that she likely won’t see much of me until Sunday night on a scheduled gaming weekend. I have huge gaming displays (including a 61-inch 3-D setup) and advanced gaming PCs, but sound has been a problem.

If I use the big connected sound system it scares the animals and my wife isn’t pleased, but headsets are typically two dimensional and my best doesn’t have a microphone.

Enter the Psyko Audio Labs 5.1 Gaming headset. It does a nice job with positional sound, so that with games that have positional sound, you can hear where you are being shot from and you get an impressive 5.1-like sound experience. 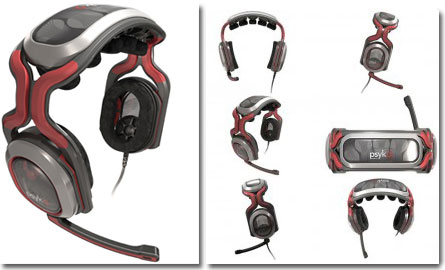 These aren’t cheap, costing around $300, and you won’t be taking them on a plane to listen to your media while traveling because they are fricken huge — although they also look cool. Be aware, though, that for music they don’t sound that great.

However, I have other headphones (including a great pair of electrostatic ones) for music. For gaming, if you can afford them, I’ve seen nothing yet that’s better for directional sound. I should point out that recently Amazon dropped the price down to $234, making them more affordable.

In 2013, we’ll have vastly more realistic games — and you can’t get there without realistic positional sound you can enjoy without scaring your pets. As a result, the Psyko 5.1 gaming headset, while not perfect, is my product of the week.