The Intel-Apple war has been on a break ever since Intel won and Apple moved its PCs to x86. However, Apple has clearly been itching for a rematch with the iPad, and it has been chewing up PC market share at an impressive rate while Intel’s been caught napping.

Well, Intel has promised 10, count them, 10 new iPad butt-kicking tablets at Computex, and it is roaring in with wallets open and guns a-blazing. Can Intel take the momentum from Apple — a firm that now appears more unbeatable than Intel ever did? I’ll get into what Intel needs to do to take the battle back to Apple.

I’ll close with my product of the week: the best ThinkPad ever made and the only product that regularly kicks some Apple butt.

Intel can certainly address the disadvantage, but taking control of a market from an entrenched vendor is a bitch — as most folks, ranging from AMD to VIA and Transmeta, have learned when taking Intel on.

So the iPad sets a tablet standard — but much like Apple took the MP3 market away from Creative Labs, S3 and Microsoft, someone could take the market away from Apple, so let’s look at the bar in hardware and software.

Folks don’t care what is inside their tablets, but they do care about things like weight, price and battery life. However, Intel doesn’t have to beat Apple on all of these vectors — it just has to be close enough, and knock the ball out of the park on something folks want to do, but can’t do, on their iPads.

The iPad weighs in at a heavy (for something you would hold in your hand to use for a long time) 1.35 pounds fully configured. Folks generally won’t notice anything under 20 percent, suggesting Intel’s tablet could weigh as much as 1.62 pounds and still be seen as competitive, but it would need to be less than 1.08 pounds to be seen as superior.

The iPad is considered a premium product, making pricing higher very difficult. The iPad starts at US$499 but can easily exceed $900 if fully configured. The next big price break point is $200, and given that $499 is a break point, Intel’s top tablet will need to start at $499 or less, or it won’t be competitive.

In market, with hardware, only the brand new refresh of the Samsung Galaxy tablet is truly competitive across all areas with the iPad — but the bar isn’t just hardware, and the Galaxy tablet uses an ARM processor.

One of the iPad’s greatest strengths is an elegant, easy-to-use interface that provides intuitive access to the product’s core functions and applications. There is currently no product in the market that comes close to this in a tablet; however, the Windows Phone 7 product is arguably superior on phones, suggesting that something better could be done here.

Unfortunately, none of the Google products come close — and you can’t get the Windows Phone 7 interface on a tablet, so there will need to be some heavy lifting done here.

Android Ice Cream does look vastly improved, though, suggesting this gap could be closed — and Intel has its own operating system, MeeGo.

However, it isn’t just the user interface — it is the apps, and Apple has more than any other vendor. What’s more is the Apple application developer environment is relatively profitable, while the comparatively few application developers for other platforms have found profit elusive.

In fact, on the Android platform only free applications seem to be moving in significant volume, and therefore, only those with good advertising revenue sources are making money.

On the other hand, users only seem to want five applications on their tablets, suggesting you could get close enough with the right five apps: Kindle reader, Netflix player (which isn’t yet available on Android Tablets), Skype, a productivity application like Microsoft Office, and one addictive and popular “Angry Birds”-like game would likely be close enough initially — but eventually this will need to get much richer.

On top of that, it will need core functions like connections to social networking platforms and a great comprehensive email/calendaring application as a minimum.

Now all of that is just to be considered a player.

To win, one or more of these tablets will need to do what Apple is unwilling to do. This could include a higher level of personalization; a high-affinity product tie-in with a top celebrity like Lady Gaga or Oprah Winfrey (Winfrey loves the iPad but Apple would never create the Oprah Pad); better content access (first run movies/real-time TV); or a browser that lets you view the future.

That last would be kind of handy given the world was supposed to have ended last weekend which, if it did, would have made this column a total waste of my time.

In a few days, we’ll know whether Intel has the right stuff or is shooting blanks. They get 10 shots. Apple only needed one.

Probably the best notebook in the market at the moment is the new ThinkPad X1. It has a size and weight in line with the MacBook Air but is vastly more capable and sturdy.

It has a better port out as well and a better keyboard (ThinkPads have the best keyboards in the world). It uses an iconic design — which, while not as pretty as the MacBook Air, is far more practical — and it represents a company fighting with its strength, not just cloning an Apple product poorly. 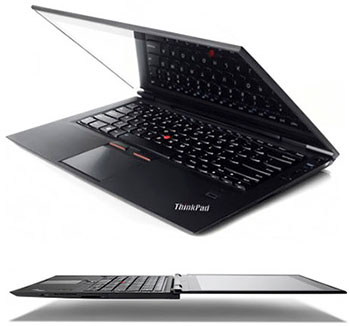 For instance, it uses Corning Gorilla Glass for the screen, and has full roll-bar protection while being tested to a number of military-class durability levels. It has a water-resistant keyboard, built-in physical security, and it will take an external slice battery giving it iPad-like 10 hour, all-day battery life.

It can be had with up to an i7 processor for power, taking it to near desktop performance levels, and it has HDMI-out, which allows you to watch Netflix on your hotel room TV (something I’m doing on virtually every trip now).

In short, while the X1 isn’t as attractive as the MacBook Air, it is far more practical — and for those of us who live off our laptops, it is a far better choice.

In the end, however, what makes the X1 the perfect product of the week is that it is the quintessential ThinkPad and showcases the best Steve Jobs-like competitive strategy of any Apple competitor.

Lenovo, with the X1, is fighting its strengths rather than letting Apple define the battlefield. That’s how you win, and that’s why the ThinkPad X1 is my product of the week. It hits the stores tomorrow.